A twenty year Hollywood specialist now firmly in the location managing elite, Laura Sode-Matteson was born  and raised in Hawaii. In the late 70s Laura scared up a job working on the original Hawaii 5-0. Then she was noticed by the legendary Jack Lord. Although she had no ambitions front of camera, he cast her as a secretary, Luana, in the last season.

“It was fun! But the show folded and so I came to California and looked for production jobs as that was what I really wanted to do with my life. I scrambled around for a while trying different roles - wardrobe, studio receptionist, production secretary, production co-ordinator - and then Lynn Morgan (from Spelling) gave me a chance as a Location Manager, and that was it really. I decided to make it my thing. I loved exploring and finding new locations and being exposed to people from all walks of life.”

After several TV movies, Laura broke into the film world, cutting her teeth on the cult 80s Stallone vehicle Cobra.

From then on, her resumé reads like a swashbuckling action adventure hero’s wet dream: Rocketeer, Batman Forever, Batman and Robin, Gone In Sixty Seconds, Jurassic Park 3,  Ang Lee’s Hulk , Hidalgo,  National Treasure, Pirates of the Caribbean 2 and 3, G.I Joe: the Rise of Cobra, and most recently John Carter of Mars and Battleship - both Taylor Kitsch vehicles (for whom 2012 will be a very big year). Laura has spanned three decades of action flicks providing desert, ice, mountains, hills, jungle and more desert, for tough guys to do tough things in.

As you can imagine, talking to Laura is a veritable feast of beefcake-related anecdotes, most of which are unprintable. But much more importantly she has a remarkable mental database of every possible variant of action location in and around the Western US, and beyond. She remembers working for Ang Lee (pictured together at Delicate Arch, Utah) very fondly:

"Ang Lee was an incredibly inspirational director to work for. He had such a clear picture of what he wanted. He would bring in pictures with textures and dreamed-up locations, all very precise, and say ‘this is the look! Could you find this for me please!’ For The Hulk we scouted every state in the western USA, searching for his vision, which for a location manager was such a great experience. We ended up filming in California, Utah and Arizona."

Laura went on to win a CA on Location award for Location Professional Of The Year for The Hulk. One doesn’t traditionally hear a geat deal about Utah as a location. Why does Laura rate it so highly?

“Ohh, the desert is achingly, stunningly beautiful, some of the most amazing natural landscapes I have worked in. What makes the desert so amazing is the severe weather patterns, which can be challenging to filming. We went there again recently for most of John Carter of Mars, where we were shooting Utah deserts for the red planet. What we discovered was how quickly the weather could change. It can go from calm weather to 70 mph winds, to freezing weather and heat in the blink of an eye. There was one day when we were shooting at Fisher Towers. We had every bit of clothing on as it snowed on us in the morning, but it was 80 degrees that same afternoon.”

Laura recently spent a few months on the forthcoming blockbuster John Carter of Mars which was shot mostly in Utah (although all the stage work was done in the UK). She was glad that she did:

“Nowhere does desert like Utah. The State of Utah was very helpful, and we tried to film as much as we could on Utah State School Trust Lands, or State Parks which were more flexible. 70% of Utah is owned and regulated by the federal government which includes the National Parks, National Forest, or Bureau of Land Management.

Was John Carter an easy shoot then?

“ No! Permits were a real headache, because so much of the land is run federally for whom ecology is the absolute watchword, and rightly so. We spent a fortune on studies. We had to show we weren’t affecting a bat habitat, or a Sandy Buckwheat grass that grows in a Tule Valley dry lake, and then that we weren’t affecting the migrating birds, or Wright Fishhook Cactus habitat. Juggling everyone’s concerns was amazingly complex: We couldn’t shoot at one location on Lake Powell because kid goats could frolic and drink water there. Gaining permits is like childbirth - the worst bits I have filtered out!”

Utah aside, does Laura have any favourite locations overseas?

Well Hawaii is overseas of course and it’s very close to my heart. But I enjoyed Prague, where we went for GI Joe in 2008. 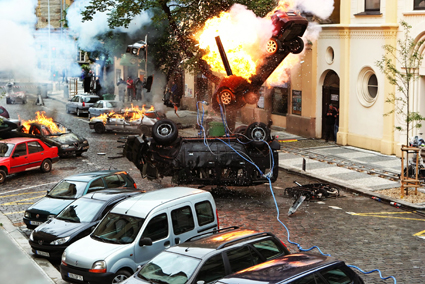 "We went at a time during the writer’s strike so the industry in the US was really low, and as result there was a drop-off of work for those guys. My crew was amazing, we had the very best of who was available. It was a very different way of filming, with the government involved at every juncture.”

Presumably Laura had to organise some pretty far-reaching permits to get the stunts in the can?

“Oh yeah. We did lots of big shots there. I believe we were the biggest thing ever done in the city at that time - lots of street explosions and car chases. I have to say, there was a little reluctance there. The powers to be needed lots of hand holding, but we built trust, and they relaxed and let us do an awful lot.”

Laura also spent some demanding days on the set of 2004’s National Treasure, which shot in Washington DC and Philadelphia.

“Philly was tough, we were filming at the Liberty Bell at a time when they were moving it from one home to a new one. We made a lifesize replica of the Liberty Bell.  As soon as they finished the new building, we had 48 hours to get our Liberty Bell into the new home, dress and shoot Nick’s scenes, and get it out again. We finished last thing on the Sunday, removed our prop Liberty Bell, so they could have the opening ceremony twelve hours later on the Monday.”

It’s clear that Laura has been through the mill many a time. I am interested to know why she is so good at this job.

“One thing I’m sure of: having a family makes me a better location manager. I can say ‘Hey! It’s only a movie!’ When calmness and confidence are the things you are judged on, it helps to know that, you know, there are things in life that are more important than you. Family keeps me levelled out, and handling the stress. Compared to raising a family, juggling relationships and time, films are easy to do.”

Laura also prides herself on responding sensitively to the human demands of location hunting:

Ultimately when you go into a neighbourhood you have to be aware and sensitive to the culture, and respect the communities.

"You should find out of how they do things, and work within the framework. Acknowledging that framework is what makes the difference.”

Finally, where are Laura’s favourite ever locations?

“My home turf: Hawaii. Most films are shot around Oahu, and Kauai, but the big island of Hawaii itself needs to be filmed much more! I would have said the most astonishing underused location was the Shipman Estate near Hilo, with it’s old growth jungle, but it’s recently been used for tons of stuff. I am not going to tell you anywhere else, these are secrets - you’ll see a lot more of Hawaii on screen soon!”

Laura is currently working on Battleship, which along with John Carter of Mars will be released in 2012.