Written by Chris Tangey on Jan 24, 2011. Posted in Contributors / On Location

Filming in the Australian outback

The outback usually evokes images of a silent, hot, empty void. But is it really like that? Well yes… and no. I suppose I should have some idea - I’ve lived smack bang in the middle of it for 23 years.

The definition of the term has taken a bit of a beating in recent times, mainly thanks to the US series Survivor-Outback, which was set, ridiculously to me and many other Australians, on the tropical Queensland coast. Unfortunately, such is the power of such mega-shows that there are even now young Australian adults who believe the outback stretches from the Indian to the Pacific coasts. What we can safely say is that the outback is actually about five million square kilometres and covers the driest parts of the Australian continent.

But this is no Sahara. In fact we really only have one true desert - the deep red Simpson that didn’t even have a name until the first white man crossed it in 1936. The outback is in fact more accurately described as semi-desert or arid. 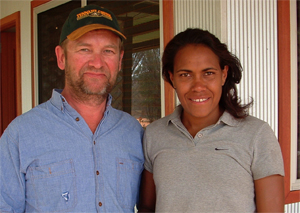 Why do people come here? Jobs in the last few years have included the usual National Geographic/Discovery documentaries, global TVCs for Visa, scouts for everything from big budget features like Ghostriders and Australia to complex productions for BBC Science and its Natural History Unit. I'm pictured left after three weeks in the desert for Lonely Planet Television's Going Bush with Sydney Olympics star, Cathy Freeman.

We had a Canadian reality show called The Skinny Dip where a rather lovely girl charmed locals into taking a naked swim with her. We’ve looked after the Royal Ballet and the Australian Opera, NASA, Martin Clunes on a dog hunt, chased marsupial moles with Animal Planet’s Nick Baker, flown a Japanese hip-hop/reggae band up a mountain for a music video and watched Rolf Harris despair as a desert thunderstorm obliterated his newly-created canvas of Uluru. We even had a white LA-based Producer who (without telling the local talent prior) dressed up as an Indian chef and talked about the healing properties of Aboriginal foods.

What is there to see in the outback? Such a vast area has any number of looks from the once Himalayan-high Macdonnell Ranges to the previously mentioned Simpson, the longest parallel sand dune desert in the world. There are vast stony ‘gibber’ or pebble deserts, giant mesas, ancient canyons, massive salt lakes and gargantuan ‘claypans’. I know of one of the latter that covers about 500 square kilometres and is completely silent at its centre at night – it hurts the ears! It is so flat that it has a horizon more finely delineated than the open ocean, making the sun look like an egg on its side at sunrise and sunset.

Of course the most famous location in the entire outback is Uluru - or Ayer’s Rock - the largest monolith, or single rock, on the planet. It is no less than 9km around its base. Nearby is the stunning Kata Tjuta or Olgas, less well known but possibly even more impressive.

What are the challenges? Well, there is no greater challenge than the aforementioned Uluru/Kata Tjuta National Park. Hiding behind the Aboriginal traditional owners, it is run by the faceless bureaucrats of Parks Australia, which has an obstructive, officious and entirely negative view of camera crews. It is governed by a 1,000-page act of parliament that would be more at home in North Korea than the otherwise laid-back outback.

Suffice to say I once had the Park Media Manager tell me in hushed tones: “What you don’t understand, Chris, is that the purpose of World Heritage status is to exclude humans, not include them.” Trouble is, every crew I have dealt with that is knocked back for a filming permit (only 15% are approved) have refused to complain, not wanting to “rock the boat” or that they are thinking about “next time”. Guess what? If this keeps up there won’t be a next time, for anyone.

Luckily the State and Territory wildlife services, so far, have a more co-operative approach especially in the Northern Territory, where common sense is seen as the highest virtue.

Speaking of wildlife, it abounds out here from the oddly cute bilby and thorny devil lizard to animals from other continents that now run wild in enormous numbers. In fact, with huge areas of unfenced roads, both dirt and bitumen, they represent one of the challenges for crews travelling here. Millions of wild camels, horses and cattle roam unhindered, which is why many locals refuse to drive at night. I’ve seen a Toyota troop-carrier changed instantly into a convertible after hitting a bull camel and most rental firms will void your insurance for night-driving, quite apart from the flat USD5,000 excess on 4WDs. Do yourself a favour and get a local to drive.

Temperature ranges are just as big as the landscape, from overnights of -5 Degrees Celsius in winter to regions where the mercury rises to plus 50 Degrees Celsius in summer, which can be seven months long. In the “top end” of the outback - those areas in the far north of Australia - you should be aware of the wet season. From October to April, wet ‘bulldust’ roads create conditions not unlike driving over grease on glass - in other words if you get stuck you won’t be going anywhere.

Here in the arid areas our combined Winter/Autumn/Spring from April to September inclusive is just glorious, with rarely a cloud in the sky and temperatures ranging from 16-25 C during the day.

The other half of the year is a different animal altogether.

Too many crews understandably arrive to escape a frigid Northern Hemisphere winter to our summer wanting to hit the ground running in 40C plus (104F). This is just silly and downright dangerous. Incidents have happened with others but our business, for one, won't play that game.

We shoot productions ourselves and know what the human body can handle out here. We are more than happy to plan a heat strategy with the client and in these days of litigation and liability it would seem advantageous to all to make the shoot work, without people falling over unnecessarily. 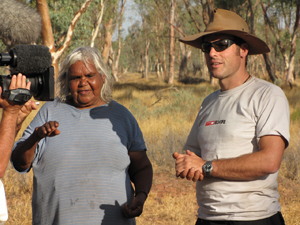 Many crews also come here to meet the Aboriginal people, the longest continuous culture on Earth. Here in Alice Springs we have four main language groups, but there are many more further out in the desert. There is not space here to relate all the nuances, but let me give you a few examples: In Arrernte, it is polite to tell people what they want to hear, which can make appointment times with talent interesting! When somebody dies you can no longer say their name and their new name is Kumantye which literally translates as “no-name”.

Before the white man arrived in Central Australia if you looked an Arrernte man in the eye it meant you had violent intentions and a handshake equated to the mafia “kiss of death”. What did the first white people do? Looked the locals in the eyes and firmly shook their hands! It is still the same but traditional people now ignore these faux pas. Payback is still the norm here, with a common punishment for serious matters being a spear plunged right through the thigh and out the other side.

I guess the lesson here is similar to all remote locations you might find yourself shooting in around the world: always listen to the local professionals. They’re not perfect, but in so many ways they can help you avoid the pitfalls and challenges that await the unwary.