Mary Barltrop moved to Australia from London ten years ago and has become one of the country’s top Location Managers, working on Superman Returns, Australia and X-Men Origins: Wolverine as well as numerous TV shows. She talks to The Location Guide about Australian attitudes, Blue Peter badges, Baz Luhrmann, undiscovered meteorite craters and The Bungle Bungles.

TLG: Hi Mary. Thanks for talking to The Location Guide. What's your background and how did you end up in Australia?

MB: Hello, it’s a pleasure. I was born in England and lived in England up to about ten years ago.

I cut my teeth working for BBC Drama on Eastenders and Casualty, and I did some time working on factual programmes for the independent sector in the UK as well.

TLG: Have you got a Blue Peter badge from your time at the BBC?

MB: Yep. I got mine for letting them film on the Eastenders set- the badges are like gold dust. Are they still a great way to get access to anywhere in the UK? People are in awe of those badges! Whenever I flash mine to a Brit here, they go all nostalgic.

TLG: Blue Peter (the BBC's flagship children’s TV magazine show that's been running for 50 years) badges are still powerful door-openers in the UK. When did you realise you were destined to become a Location Manager?

MB: I was working on a drama called Holding On and spent a lot of time with the location people on set. I became obsessed with questions like ‘How do you take over a council estate in South East London?’ and ‘How do you close the roads at the same time?’. I quickly realised I wanted to be a Location Manager, and worked all over the UK and then in Cyprus getting some great experience. Then I emigrated to Australia in 2000 and started working for Screen New South Wales.

TLG: And how did you find it when you arrived? 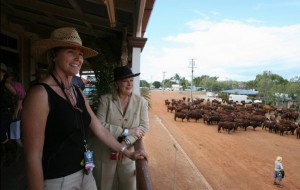 MB: In the UK at the time one either did commercials, or TV dramas, or film, and it was difficult to cross genres and do a mix of projects. When I got to Oz I found it suited my personality really well, as you can get involved with all aspects of the industry. The business is relatively small here compared to Europe, the US or the UK. There is a relatively small pool of really good crew talent, so people here know everyone.

You can go from a small-budget domestic film or long-running TV show straight onto a USD300 million project like Superman Returns or Baz Luhrmann’s Australia (pictured above on set). There is no snobbery in our industry at all. I would say that Australian crew pride themselves on always being incredibly resourceful, adaptable, open to change and inventive.

TLG: Screen New South Wales is a great place to end up for someone wanting to learn a lot about Australia very quickly…

MB: Back in 2000 they hired me for my digital camera knowhow and I created their digital stills location database, which meant I could research everything in NSW and Australia at the same time. I ended up helping deal with enquiries and pitches and I suppose I became a go-to gal for location ideas for the state. I was then poached to work on a Top Gun style US feature called Stealth with Jamie Foxx. I was the Assistant Location Manager and it was a great one to cut my teeth on as it involved lots of cheating. It was all cheating! We shot the US, North Korea and Alaska all in Sydney, New Zealand and South Australia.

TLG: What was your favourite cheat on Stealth then?

MB: The cheat I’m most proud of was making a Blue Mountains farm become the North Korean DMZ (demilitarised zone). We made it a horribly bleak, stripped-down place with miles of fences and barbed wire and watchtowers, and we laid waste to the arable fields. I suppose one amazing thing about Australia is that there's so much space. You can always find someone to give us the territory to do ambitious stuff like that. People just say 'Yeah sure, there’s 1,000 acres in my back paddock - knock yourself out!' and as long as you get the land back how it was you can do anything you like! People are relaxed. Imagine doing that in London!

TLG: What happened next?

MB: So then I worked on Superman Returns in 2005/6, and again we were matching for the US. In the last ten years this has been the theme. Big US pictures came over here for the weaker Australian dollar and make massive films because they get perfect American generic rural and cityscapes in and around Brisbane, Sydney and Melbourne. Small-town America is so easy to do here, as the mid-West of Australia looks like the mid-West of the States. We even have a wheat belt!

I loved the massive scale of the Superman Returns project. Anywhere else a blockbuster could have turned into insane hours, but working conditions for crew are excellent here.

Jobs get done efficiently, but it's usually 12 hour-days only five days a week. They love a decent work-life balance here, which is another bonus.

TLG: And then you spent a fair bit of time working on Baz Luhrmann’s Australia, right?

MB: I was one of the three Location Managers on the film, yes. I specialised in New South Wales and Queensland. Of course, the landscape was a main character in the film and it was very exciting to be involved in this most amazing Australian project. Baz Luhrman is a very endearing and engaging Director, and he had everyone keen to go the extra mile for him with his imagination and vision. He had the crew in the palm of his hand because he treated everyone so respectfully. We had these colossal production meetings that were so big they had to be held on studio sound stages, with 60 people contributing. He would chair the meetings like an orchestra conductor and he was so inclusive, valuing everyone’s contributions. On set it was a bit like Cecil B. De Mille, as he talked through this huge loud hailer, entertaining and gently cajoling the cast and crew. He’s an entertainer and everyone fell in love with him on that movie.

TLG: And how are things at the moment with film in Australia?

MB: Well, as I said earlier here you can jump between genres and I like to work on TV stuff as well. At the moment I'm in Sydney on Packed To The Rafters, a suburban comedy-drama, which is the biggest show in Australia right now. It's very challenging and fast-paced. Presently, with the US dollar being at parity with the Australian dollar, there are fewer US films happening here.

There are lots of films being made for domestic release, like last year’s Tomorrow When the World Began, which looks like a US blockbuster, but was made for relatively little money in Sydney and New South Wales.

Its cinematic release in Australia and New Zealand was hugely successful, and it is due to be released soon in the UK, Canada and Europe.

TLG: So what are the extra challenges for the Location Manager working in TV?

MB: Obviously TV takes a different approach. It can be harder to work on TV because of the smaller budgets. It's natural for Directors to hanker after the similar cinematic landscapes you see on film, but for a fraction of the money. It’s challenging, but we can get an awful lot done here as we have so many astounding locations and so much space.

TLG: Do you have any standout astounding locations from your adventures over the last decade? 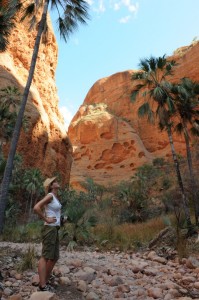 MB: I've spent those ten years perpetually in awe of the landscape. For instance, the first thing I think of when you ask that question is an astonishing place in the north-west of Australia, in the Kimberley region, which we showcased for the first time in Australia. It’s a tough frontier land, sparsely populated, with very tough logistics - six hour drives on dirt tracks is nothing out there - but the rewards are phenomenal because it gets you to The Bungle Bungles (Purnululu), which is a place that just defies description (pictured left).

TLG: Oh please have a go.

MB: They're huge, red monoliths in the outback, which look like beehives, that are each the size of the Empire State Building. They're rock formations that have eroded in the most dramatic way you could imagine; they're made of endless fissures of striped colour where the rock has stratified. I could not believe it when I saw them for the first time. They have just been shot for a recent Qantas commercial if you want to see what I mean.

TLG: Okay, so there must be some secret places you have found you can tell TLG about then?

MB: Yes, we have amazing places to spare, many that have not been on film before... Let’s think… In the Flinders mountain range there is a place called Wilpena Pound. It’s a massive meteorite crater, the size of a volcano crater; millions of years old. I was recceing there recently. There is only one word for it: prehistoric! It is also stark and beautiful, and kind of post-apocalyptic. You could shoot an amazing dinosaur movie, or a Mad Max-style adventure, or it could cheat for Afghanistan easily. It’s a beguiling place that will make Directors very happy indeed.

TLG: Okay Mary, thanks very much. TLG senses you have another thousand places up your sleeve, and suggest to our readers that you might be a pretty good port of call for anyone thinking of Australia. Bye!

MB: Lovely to talk to you. Bye!