Filming in Mumbai can be a challenge at the best of times but IFILMINDIA had its work cut out when London-based Casual Films asked them if they could shoot scenes for a commercial in Mumbai. The catch? The first shoot date was less than a week away.

With the clock ticking on the project for the European Petro Chemical Association there was no shortage of head-scratching issues. The Indian segment of the ad involves a local woman buying a hybrid car and using it to avoid the city’s traffic - a feat positively mocked by Mumbai’s chaotic streets. 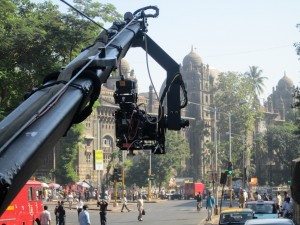 There was also a potential problem with permits. Jean-Patrick Costantini, a Line Producer with IFILMINDIA, applied for permits for several different locations - with back-ups included - as the lightning-fast planning period meant they didn’t have time to check everything with Casual in London. The company then turned to personal contacts in the Indian Government to speed up the process.

Costantini said: “The process of shoot permits in India is long and not flexible at all, especially with a tracking car. There are no permits covering the entire city to just drive around - you must apply for a precise permit for a particular district or street of the town.”

Permits were one thing, but finding the right car to film with was equally important. The Toyota Prius is perhaps the highest-profile hybrid on the market, but although the production found a Toyota showroom and started getting permission to film there, there wasn’t an actual Prius available in Mumbai.

Luckily the team wasn’t hamstrung by having to use a specific brand, so a Mumbai-based Honda Civic hybrid was the back-up plan. That meant ditching negotiations with Toyota and finding a film-friendly Honda showroom.

The showroom was worried about lending a new Civic to face the perils of the Mumbai streets, so a private owner had to be sweet-talked into providing his vehicle.

Last but by no means least, the production didn’t have the right camera. Costantini said: “[The full commercial] was shot in several parts of the world, so we had to match the quality of image already done. But the UK camera that shot in other countries including Africa was not able to come to India, so at the last minute we had to find equivalent equipment in India. We shot with a RED camera - easily found in India - as the rest of the shoot was done.”

The production ended up filming on a Sunday in an effort to get fewer cars and vehicles on the road. Costantini concluded: “If I had more time to change the locations for this shoot, I would have gone with Chennai (formerly Madras), as we found in this city the perfect hybrid car that was needed for the film shoot and all street locations could answer perfectly the definition of the script. Chennai is another important film industry centre in South India and all crew and equipment is also available there.”

Additional scenes for the final commercial were filmed in Kenya and London as the advert’s concept is the idea of chemistry in action every day around the world.