Guinness has always known how to make an impact in the advertising world. For its new spot, Dark Life, the brand travelled to New York, Hong Kong and Bogota to capture kinetic images of night-life in three of the world’s most bustling cities.

Irish International said: “The ‘more life in the dark idea’ is a universal one, true around the world, thus we wanted to show this by incorporating a cross-section of diverse scenes, from New York to Hong Kong and Colombia. Also, the script called for buzzing nightlife imagery, so understandably Hong Kong and New York City were identified as perfect for delivering this sense of a pulsating metropolis.”

Clearly New York is one of the most iconic American cities, but the production decided to bypass much of the usual permitting process by filming on the fly. New York is usually very strict when it comes to granting permits, but the improvised feel suited the tone of the commercial too, especially as the Canon 5D was the main shooting tool. 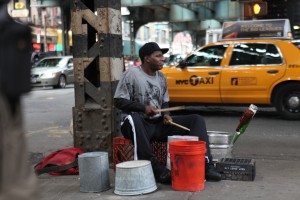 Simon Cooper, an Executive Producer with Academy Films, said: “You need a lot of permits to film in New York, but we got around this by doing it guerrilla-style. We wanted the iconic imagery of the city. Hong Kong was a riot of lights and we were largely ignored as we filmed, which worked out well for us.”

The Hong Kong leg of the shoot lasted three days and involved filming natural scenes of the bustling streets and staged scenes showing dancing and cyclists. Carson Ng, of ASAP Productions, said: “The challenge had been the fact that we needed to be flexible since we were shooting the recce! But we managed very well. I think they chose Hong Kong because the city is bright and busy at night and easy to film – it’s easy to get permission in public streets. We had four cameras at the pedestrian flyover shooting dancers with less than 24 hours to get permission.”

Colombia filming took in the city centre of Bogota, the farming community of Suesca outside the city and in a steel foundry three hours into the Andes. The team fought hard to get permission to film in the busy foundry, as the factory’s daily profit margin dwarfed the location filming fee.

Colombia filming took in the city centre of Bogota, the farming community of Suesca outside the city and in a steel foundry three hours into the Andes. The team fought hard to get permission to film in the busy foundry, as the factory’s daily profit margin dwarfed the location filming fee.

Warren Keuning, of Tribu International, said: “We managed to contact the owner of the foundry and after appealing to his kind nature and hearing of the importance of this project for our company and the Colombian film industry and international image he complied and gave the order to permit us to film in his factory. Of course we had to comply with the company’s very strict insurance and safety regulations and use protective clothing, helmets, goggles and steel capped boots at all times.” 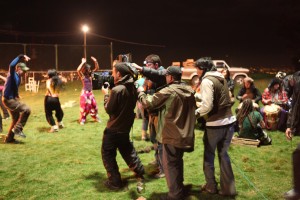 Bogota presented the biggest general challenge as a shoot location as its industry is much younger than elsewhere in the world. Irish International recommends checking what equipment is available and to be prepared for both the altitude and erratic weather conditions.

The company said: “Bogota is a mile and a half above sea level so acclimatisation was something we had to adapt to. As is the weather pattern. It has its own micro-climate and tends to rain every day between midday and 3pm. If continuity is a factor in shooting, it will make life difficult during the rainy season.

“Shooting days can be interrupted by heavy rain or hail at certain times of the year. Oddly mornings and evenings tend to be clear. So do the weather homework. Factor in lengthy journey times when travelling around the city or to rural areas. Food was very good, both the catering and local restaurants. There was a huge variety with good value and high quality.”

Cooper added: “Bogota was very cost-effective as a shoot location, although we didn’t do much filming in the actual city centre. We filmed scenes on a hill overlooking the city in a less dangerous neighbourhood – we never felt at risk.”