Written by Malcolm Scerri-Ferrante on Feb 18, 2011. Posted in Contributors / On Location

Malta - a small island with a big film industry

Back in 1999 a CNN journalist coined the phrase “A Hollywood in the Mediterranean” in describing Malta as it simultaneously hosted two big budget films - Gladiator and U-571.

Back then even I (I'm pictured on the right in Slovakia with Eragon director Stefen Fangmeier) thought it was only a temporary trend. With the absence of a home-grown industry Malta’s servicing sector has for decades been a very unpredictable one. But the past five years have seen such an influx of productions that local crews are struggling to catch their breath between one shoot and another.

What probably solidified this trend was the introduction of financial incentives in 2005 where producers currently get a cash rebate of up to 22% on most of their expenditure. This incentive is simple to process and foreign crew salaries are eligible if they come from the EU.

Malta - which also consists of a smaller and very interesting island called Gozo - is special because it can play a large number of countries and looks. It is so small, with a population of less than 400,000 that moving the unit base feels more like hopping around rather than a logistical nightmare. 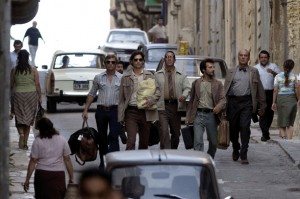 Malta's typical Mediterranean villages have hardly changed contrasting with its modern urban areas. For example Spielberg’s Munich (pictured right) used Malta to depict Israel, Palestine, Beirut, Greece, Cyprus, Athens, Spain and Rome. For The Count of Monte Cristo, Kevin Reynolds decided on Malta after a thorough scout all over the Mediterranean for old Marseilles harbour. What was initially a one-week shoot become a schedule of five weeks as Reynolds decided to depict Rome and other French regions on the island as well. Reynolds said publicly: “We ended up probably getting 80% of our locations in Malta. It’s quite extraordinary. I didn’t expect that.”

To make matters even better, a massive fort where the likes of Gladiator, Troy, Agora (Alejandro Amenábar and Rachel Weisz pictured below on set), Helen of Troy and Julius Ceaser were filmed is offered by the Government at a negligible rate of EUR12 per day during prep and EUR70 per day for filming. This fort is already booked till February 2012! 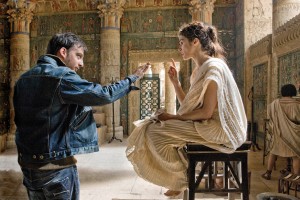 Having filmed in other countries, some with mature film industries, I have learnt to take Malta less for granted. Everyone here speaks English, the locals are friendly and enthusiastic to help or work, distances are so short that you can drive from one tip of the island to the other in 45 minutes and the climate is one of the best in the whole of Europe. Winters are mild, rarely going below 11 degrees, and summer averages around 32 degrees.

When shooting between October and March I usually advise a minimum of one and a half days of weather cover per week of shooting. But as I write this in February the sun has been out every day for the past two weeks with hardly a drop of rain. Some British and Nordic tourists are even going for a dip!

What remains a challenge in Malta is the availability of local crews. If I’m the only one shooting then I could crew up as much as 75% for a TV commercial or film, bringing the remaining 25% from abroad, usually Germany. But if there are other productions shooting it becomes more like 50/50 and this can put a strain on tighter budgets.

A couple of equipment companies have set up house for lights and grips which helps if your shoot is short and undemanding. But for long shoots, or long equipment lists, I usually find it makes more economical sense to bring over a truckload from Germany. Film cameras must always be shipped in, as well as the camera technicians. I send the rushes to London or Italy since there are no labs in Malta.

Malta, being an island, also has other disadvantages. For example some materials that need to be imported are slightly more expensive then on the European mainland. And certain equipment and people simply need to be brought in, at least until the industry grows further. However I think the overall pros far outweigh the cons and the huge influx of productions (some ten sizable productions each year) are proof of this.

One of the main attractions in Malta are the famous SFX water tanks. The first, and principle one, was built in 1964 and measures 300 feet by 400 feet and has a natural horizon. The company managing the tanks is world-renowned for set construction and model making. They are also very experienced in raising storm effects in the tanks. They truly are a unique asset for Malta.

To be frank, I still think the servicing industry needs to mature much further.

Some Government policies within departments need to be re-configured with the film industry in mind and some locals need to take the film industry less for granted when negotiating their location fees or salaries. Despite its 35-year history of film servicing, the Government has only just started to understand the true potential of this industry. Recently I have managed to set up a new lobby group consisting of all leading service providers and local production managers in order to help the Government with its future policy making and instill better parity and competition with local crew rates.

Hopefully this still fledging servicing industry shall solidify itself, grow and continue to attract worldwide attention for many years to come.