Written by Rowena Carr-Allison on Feb 22, 2011. Posted in Interviews

I’m meeting a man I don’t know. This doesn’t happen very often. It’s nerve-wracking, especially here. I’m at the famous Urth Caffe, on Melrose. The sun is shining and movie movers and shakers, or those who would like to be, are basking in the sun, ordering decaf soy lattes and having power meetings. For a short while I’m going to be one of them. It feels pretty good.

I’m in West Hollywood to meet Bill Bowling (pictured below in Austria). 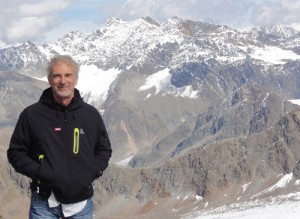 Bill is a one-time university professor, sometime documentary maker and well known Location Manager who counts big names like The Insider, Red Dragon, The Horse Whisperer and many more feature films to his name.

Today Bill splits his time between West Hollywood, Oregon - where he enjoys all things green - and Asia where he works as an adviser to Governments and film networks in China, Thailand and Sri Lanka to help develop their industries.

Luckily Bill is not. In fact, he’s positively charming, softly spoken, with piercing blue eyes and a world-wise attitude.

The plan is for us to talk about the demise of an institution - the Santa Monica AFCI Locations Trade Show. Bill confirms:

It’s been the top event in the business for 25 years, maybe 30... But the industry has changed so much due to incentives and technology. Each Film Commission used to have a booth, but with the internet so much information is now available without having to actually go to the show.

He explains that over the last five years Producers were increasingly frustrated:

“With the focus on incentives, locations and the show became less important. Incentives have brought huge change to the film industry. With states like Michigan and Georgia upping the stakes, it’s no longer about the resources or the beauty of the location.”

The new CEO of AFCI’s solution? Merging the Locations Trade Show with the Producer's Guild of America’s annual Produced By conference. The new event will take place in Disney’s Burbank lot in early June. It's focused on Producers and while the Santa Monica event was free, this year’s version has steep admission fees for non-industry attendees. This is a radical change and Bill is not sure it’s a good idea. He recalls:

The first time I realised the power of incentives, I was looking for a location for a TV movie about a surfer. We were scouting the Californian beaches when the Producer called and told us to drop everything. He said 'We’re going to Canada. We’ll make him a skier'. These days they can always adapt the story to the budget.

Bill has travelled far and wide for his art, from Korea to Sweden via New Mexico, which he admits is one of his favourites because “they made filming very easy and it’s such a beautiful state.” I have to agree about the beauty. No surprise True Grit just won a BAFTA for best photography!

So, I ask, is Location Manager a dream job? He smiles wistfully “A lot of people say that. It used to be.”

Thankfully, Bill is still exploring the world. His next project? He grins: “I’m going on an adventure, spending some time in Myanmar, giving workshops for the Myanmar Producers Organisation and seeing what’s happening there…”

So hopefully TLG will be hearing from Bill again very soon.