Written by Cedric Eloy on Feb 23, 2011. Posted in Contributors / On Location

Working to make Cambodia a popular location for filming

I first came to Cambodia in 2009 to help develop the territory as a viable alternative for foreign productions wanting to shoot in South-East Asia. Key to this was to create quality production support.

I have been working closely with the Government as well as production houses to train crew and develop a film-friendly environment. Large shoots such as Two Brothers and Tomb Raider were demanding projects for Cambodia and brought to light what kind of skills and services were lacking.

One of our first goals was to make the permit process much clearer and simpler.

It used to take over two months to obtain a permit but we've brought it back to a more sensible ten working days for features and five working days for smaller projects such as commercials.

We've developed a crew training programme with the support of the French Government and have set up workshops in all film production departments run by international professionals. Trainees then work as apprentices supervised by more experienced crew. It’s been very successful so far and is a great way to evaluate the potential and qualities of local crew.

One tip would be don't ever shout at the Cambodian crew. This will only make matters worse. They are deeply respectful, hard-working and devoted to making possible what often seems impossible.

We've also gone into partnership with Transpamedia, a large French equipment supplier, to set up a local rental house for lighting and grip equipment. This has been ongoing since January 2010 and now Gaffers, Electricians and Grips are regularly trained to master and maintain their equipment.

Act of Valor, the first US feature to shoot here since setting up the Cambodian Film Commisison, was a real challenge. Everything had to be organised quickly. It even involved an explosion in the middle of the capital city Phnom Penh with 300 children as extras. But everything went well and the DoP, Shane Hurlbu, said the locations used were genuinely beautiful with no need to change anything.

Since then about 60 projects have followed and demand is increasing month by month.

In 2010, seven features shot in Cambodia when it used to be no more than one or two a year. Many incredible locations, such as the Tatai River in the south-west, have been used for the first time and Cambodia easily double for Vietnam, Thailand, the Philippines, Malaysia and Indonesia. 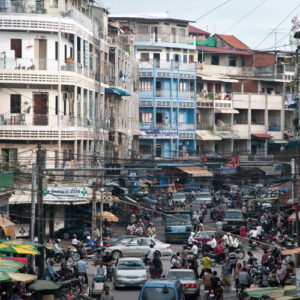 Cambodia has 'natural' production incentives as the tax system is still in its infancy so costs are lower than in other South-East Asian countries and the labour system is simple and flexible. Cheap costumes, props making, extras and set building also make it an ideal place for period films.

I ran a film commission in France for six years so the speed at which you can make things happen here always surprises me. If you have the right production partner and take the right first steps, you can choose almost any location and start building your set the week after.

I am always very happy to talk to Producers about what we have to offer. You might want to wait a few more years if you are looking for skyscrapers, but for shooting exotic Asian locations Cambodia is now a real option.