Fire and Ice: Essential Killing films on location in Poland, Israel and Norway

Polish film director Jerzy Skolimowski has shot his latest feature, Essential Killing, in Poland, Israel and Norway. The film tells the story of Vincent Gallo’s Taliban member Mohammed who is captured by the Americans, only to escape his captors in Europe.

The film defines its locations by climate rather than by specific countries, with Israel providing generic desert locations needed for the opening of the film. Skolimowski and his colleagues were already familiar with it as a filming location and knew what to expect. In addition some of the Israeli crew members were Polish speakers - an obvious advantage for the director and Skopia Films, a Warsaw-based production company - and the ability to pay servicing fees in euros was also an advantage.

Ewa Piaskowska, a Producer with Skopia, said: “We were looking for a desert and scorched landscape resembling - but not obsessively so - the scenery one might expect to see in Afghanistan or Pakistan or in the neighbourhood of those countries, but shooting in which would be a controllable and predictable affair on all levels.”

We were looking for a desert and scorched landscape resembling the scenery one might expect to see in Afghanistan or Pakistan or in the neighbourhood of those countries.

Thomas Alfandari, of Israeli servicing company Transfax, said: “The film was shot in the Dead Sea desert area, for the desert and caves, and in Ramle for an Arab market. These locations are used [for general filming] but not so often. Israel offers a good choice of landscapes - sand or rock desert, Mediterranean landscapes and Arab cities. Locations in the desert were distant and not easy to reach. In addition, deserts are preserved areas so you have to request special authorisation.”

Heat was the main challenge in Israel, although the natural environment threw up issues too. The script called for a series of explosions in a canyon that ended up being made of chalk, so the pyrotechnics had to be shifted to the most open area the crew could find to avoid damaging the fragile canyon walls.

From the searing Israeli heat to the punishing cold of Poland, much of the film’s Polish shoot took place around the southern town of Szczawnica. Piaskowska said: “[We filmed in] one of the worst winters in a while, with temperatures reaching -30 degrees Celsius. Shooting at night especially was a dreary affair, with both crew and equipment requiring all sorts of heating pads. 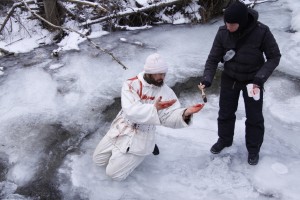 “Add to that the snow scooters driving the crew to the most remote locations, a few smashed vehicles (icy roads in the mountains not being very helpful), tons of professional underwear and a few bruises on those of us (yes, it happened to me too!) who fell flat on our hindquarters on slippery roads and that should give you a good picture of the situation!”

Polish mountain filming tends to focus on the Tatra Mountains as they’re more dramatic, but Essential Killing chose Szczawnica as it offered a closer match to the production’s Norwegian locations. Footage from each country doubles for the same unspecified European location in the film.

Most of the Norwegian leg of the shoot took place on a farm in Enebakkneset owned by animal trainer Geir Marring. It was convenient because they needed trained animals, plus the area looks like wilderness despite being only a few miles from Oslo.

Shooting close to Oslo made us save travel and transport expenses as most of the equipment rental and Norwegian film technicians and crew are based in Oslo and the surroundings.

Ingrid Lill Høgtun, a Producer with Cylinder Production, which serviced the film in Norway, said: “[Geir’s] property was perfect for the film. Almost all the locations we needed were there, close to each other. The farm also had all the facilities we needed and in addition all the animals too. Shooting close to Oslo made us save travel and transport expenses as most of the equipment rental and Norwegian film technicians and crew are based in Oslo and the surroundings. The local people at Enebakkneset were also very helpful. Besides shooting at Enebakkneset, we also shot a few scenes at Gardermoen close by.”

The crew used snow scooters and sleds to move around. Wind and snow machines proved useful as did warming tents, with the temperature reaching lows of -20 degrees Celsius.

Summing up the shoot as a whole, Piaskowska  said: “We were most of all looking for the strongest possible visual contrast of hot and cold, desert and snow, yellow and blue - with all its implications for our hero's plight - with both having the same quality of wilderness.”