It is always a pleasure to have a window seat when flying by day as you approach landing at a new destination. I had just opened my eyes after a long sleep and looked out of the window; I thought the pilot had changed course and we were landing in Hawaii.

It could be said that La Réunion from the air could easily be mistaken for an island in the Hawaii group. Belonging to France and situated just 220km south-west of Mauritius in the heart of the Indian Ocean, Réunion Island is 2,512 sq km with a thriving population of 800,000. 10,000km separate this incredible location from the French mainland but the filming incentives on offer are the same. The currency is the euro and La Réunion is just +2 hours GMT. Added to that VAT is just 8.5% compared with 19.6% in France and social security charges are 45% compared with 58% on the mainland.

Since 2009 La Réunion has been treated exactly like any other French département (state or county) and offers a 20% tax rebate for foreign features and TV productions. The TRIP (Tax Rebate for International Production) comprises 20% of the film expenses incurred in France and caps at EUR4 million per project (USD5.4 million as of March 2010). The TRIP is given to the French company managing the production in France (La Réunion Island) on behalf of the foreign Producer. For further information on this incentive visit the incentives section here.

Since 2009 La Réunion has been treated like any other part of France and offers a 20% tax rebate for foreign features and TV productions. The Tax Rebate for International Production comprises 20% of the film expenses incurred in France and French territories and caps at EUR4 million per project.

La Réunion offers an incredible range of filming locations from tropical black sand surf beaches to white sand beaches with coral reefs and lagoons. The south-east region comprises several extinct volcanoes and one that is still very much alive called the Piton de la Fournaise (2,632m), which last erupted in 2007 pouring vast expanses of lava down into the sea. This slope of now cooled black volcanic rock - barren and moonlike - is known as Le Grand Brulé (‘the big burn’!) and is a spectacular location.

Numerous cascading river locations and waterfalls creating natural pools wind their way down from the island’s highest mountain, Piton des Neiges (3,070m). This dramatic scenery of alpine peaks, cliffs, gorges and valleys offers a vast choice of locations as well as exceptional road locations for filmmakers. It is estimated that 30% of the island is covered by native virgin forest and some areas in the ravines that have never been touched by man. 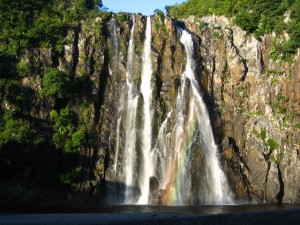 La Réunion has an abundance of plant life with no less than 700 indigenous species and grows tropical fruit banana, lychee, mango and pineapple to name a few, as well as a host of spices. Sugarcane is also grown in abundance and old rusting sugar cane mills make for great locations of yesteryear. In contrast the Technopole near St Denis compares with any modern business park location.

Location permissions are relatively quick and easy to get with the obvious conditions attached for filming in national parks and protected areas. By using a local production service company or Location Manager who knows how to navigate their way through the various French administrations will prove highly advantageous. You should allow two weeks for getting filming permits. The good news is generally location fees are less than in France with no Mayoral office administrative fees to pay.

There are about 40 production and production-related companies working across all formats operating on La Réunion and roughly 120 technicians including some Heads of Department. Art Directors, for example, need to be brought in from mainland France or further afield. Basic camera, lighting and grip equipment is also available on the island.

There are about 40 production and production-related companies working across all formats operating on La Réunion and roughly 120 technicians including some Heads of Department.

Neighbouring Mauritius acts as a close support source, with the South African rental house Media Film Services (MFS) having a base there since 2008. MFS is able to provide a full complement of the latest camera equipment. They also have comprehensive lighting and grip packages including eight-ton 100 KVA generators with load space, 18k and 6k HMIs and 7m ride-on crane. Helicopters are plentiful on the island and aerial camera platforms can easily be shipped in from France or South Africa. Editing, film and video post-production, sound mixing and sound studios (Studio Acoustik) can also be found in St Denis, the capital.

Cultural diversity has long played an important part in the island’s make-up. Réunion has the same population mix of Europeans, Indians, Chinese and Africans as Mauritius, allowing for some exceptional looks and a vast array of casting possibilities for actors, models and background extras. The only real difference is the split: Africans (45%), Hindu Indians (25%), White Creoles/French origin (15%), European other (7%), Chinese (4%) and Muslim Indians (4%).

There are roughly 7,500 hotel beds on the island so accommodating crew and cast is not a problem. Thanks to the relatively new coastal highway, ‘route de Tamarin’, which runs from St. Denis to L’Etang Salé, moving locations around the island is quick and easy.

There are roughly 7,500 hotel beds on the island so accommodating crew and cast is not a problem. Thanks to the relatively new coastal highway, ‘route de Tamarin’, which runs from St. Denis to L’Etang Salé, moving locations around the island is quick and easy. However, when filming inland you will have to allow plenty of time to navigate the winding mountain roads. Costs are pretty much in line with what you would expect to pay in France, except for luxury imported goods.

The climate is tropical with average temperatures ranging from 25 to 31 degrees Celsius and two main seasons; the cool dry season from May to October with mild temperatures and light rainfall, and the hot wet season from November to April with high temperatures and heavy rainfall. The hurricane season falls from December to March. 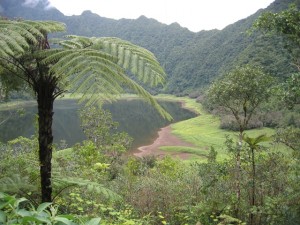 Currently most filming originates from France but the local Réunion Government is very keen to change that and wants to encourage foreigners to come and use the island’s wide range of locations. ADCAM (Association pour le development du Cinéma, de l’Audiovisual et du Multimedia), the film liaison office based in St Denis, is part of the Film France network (National Film Commission of France) and serves as an excellent base for all pre-production assistance, researching film and TV locations and all associated film production services.

There are roughly 30 flights a week to La Réunion direct from Paris and regular flights to and from South Africa (Cape Town/Johannesburg) and Mauritius just 45 minutes away provide direct liaisons with Dubai, Australia and Southeast Asia. My feeling is that La Réunion is a jewel of a location. How many paradise tropical islands do you know +2 GMT with a filming incentive? I forgot to mention the fish is excellent too!