Mauritius is undoubtedly one of the most beautiful paradise isle locations the world has to offer. It’s 2,040 sq km with a coastline of 177km and has a population of 1.2 million. It gained independence from the British in 1968 and has prospered in subsequent years.

This prosperity has come mainly through agriculture (sugar), textiles, financial services, luxury tourism, and more recently IT free trade zones. It has a highly educated population. From the air you will think that Mauritius is one big sugarcane field, but there are many more locations on offer.

At certain mountainous locations you could think that you were in the Scottish Highlands on a deer hunt! This contrasts significantly with the cyber tower, the pioneer of the futuristic buildings that can be found at Ebène cyber city and employs 15,000 in ultramodern tower block locations. Here the likes of HSBC, Pricewaterhouse Coopers and modern private university complexes can be found.

These contrast with period colonial houses that belonged to the plantation owners of yesteryear, along with modern beach villas and luxury hotel locations. You can also find rainforests, Swiss alpine-looking forest locations and plantations growing pineapple and sugarcane.

Modern tower blocks contrast with period colonial houses that belonged to the plantation owners of yesteryear, along with modern beach villas and luxury hotel locations. You can also find rainforests, Swiss alpine-looking forest locations and plantations growing pineapple and sugarcane.

Obviously Mauritius is best known for its pristine palm-fringed beach locations and lagoons hosting everything from small craft to large catamarans and game fishing boats going about their tourist business. If you need to shoot underwater then you should also consider Mauritius as a possible location. A large group of dolphins provide a rare site off Tamarin Bay. The island also has plenty of both coastal and mountain road locations that are easy to lock off.

Moving to and from locations is easy too as long as you avoid the capital Port Louis at rush hour. A highway bisects the island running from north to south from the airport to Grand Baie, the main tourist hub.

Also part of Mauritius is the incredible island of Rodrigues. Visiting Rodrigues was undoubtedly the highlight of my trip! It is like a Mauritius unplugged - like nothing’s changed for years. You feel like you have almost stepped out of the modern world into a peaceful beautiful paradise with film locations to match. For the right project this island and its people could be the ultimate film location paradise! 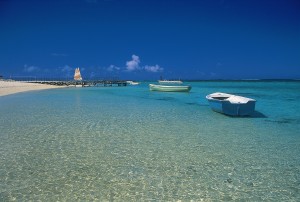 The exceptional beach locations are the reason that Bollywood has been heading to Mauritius for years, coupled with obviously a large Indian population to use as background extras and no time difference. Bollywood filmed over 90 days on location in Mauritius in 2010. Recent Bollywood filming includes Kunal Kohli – Break ke Bad and Puja Films from Mumbai.

If you have a beach or beach-related shoot to work on you should put Mauritius high on your list of locations to consider. This is the reason that the likes of Ambre Solaire, Nivea and general beach wear and cosmetics companies the world over return year after year to shoot their commercials as well as their catalogues. There is also a small but efficient local industry shooting corporate films, music videos and local commercials, often on very small budgets.

Richard Sysum is the resident local manager of South African equipment rental house Media Film Services (MFS), which has had a permanent operation based in Mauritius since 2008. He said: “On average we get about 12 foreign commercial shoots a year. The decision to open the local MFS branch was made after research showed that Mauritius’ fledging industry would benefit massively from an injection of world-class equipment that would also provide a financially-viable alternative to productions having to freight in tons of equipment for both stills and film commercials.

Phase one of the Media Film Services push into Mauritius has imported a lighting and grips package including a new eight-ton 100 KVA generator truck with load space, 18k and 6k HMIs, lighting distribution and accessories, a seven-metre ride-on crane and a substantial amount of grip equipment.

“Phase one of the MFS push into Mauritius has therefore seen the arrival of a comprehensive lighting and grips package including a new eight-ton 100 KVA generator truck with load space, 18k and 6k HMIs, lighting distribution and accessories, a seven-metre ride-on crane and a substantial amount of grip equipment. Cameras, however, are still checked and tested in South Africa before being shipped according to the requirements of each shoot.” 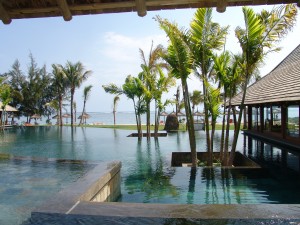 Meike Laesch, an Executive Producer at Cape Town-based production service company Navigator Films, has been delighted to take her international production company commercial clients there on many occasions: “We love shooting in Mauritius and for sure we will be back. Thanks for letting us shoot at the airport on such short notice.”

Veronika Zaplata, a Production Manager at Tamarin Films, a production service company based on the island at Tamarin Bay, said: “Mauritius is a highly efficient place where you can get things done. 9am is 9am and yes means yes! Getting a main filming permit from the Mauritius Film Development Corporation takes just three days and this general filming permit is free! Location facility fees are reasonable with filming on location in a national park costing 2 – 3,000 rupees a day.”

Casting possibilities offer a host of interesting looks with different mixtures of European, African, Chinese and Indian, most of whom speak French and English.

Local casting possibilities offer a host of interesting looks with different mixtures of European, African, Chinese and Indian, most of whom speak French and English.

The summer months are from December to April when it can get pretty humid (coastal temperatures 25 – 33 degrees Celsius) and a cooler winter from May to November (18-24 degrees Celsius). Peak cyclone months are January and February although Rodrigues seems to suffer these much more than the mainland!

Mauritius is renowned for its smiling people and the hospitality, which is why it continuously wins awards for the best hotels in the world. So there you have it. If you need pristine beach locations, just + 2 GMT with direct flights from Europe, Dubai, Bangkok, Perth and South Africa you should definitely consider Mauritius.