Jeremy Francis, a Location Scout with MJZ, said: “I decided to offer a variety of locations that showed a cross-section of the Jamaican experience. We scouted from seaside to mountains. The commercial begins in the busy downtown Kingston business district, goes to the small town of Maryland in the mountains and a few stops in between. These locations show some of the variety of the Jamaican landscape.” 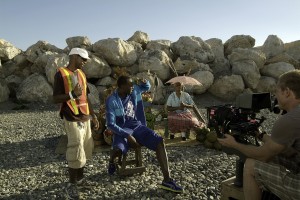 Although the bulk of filming was done in Kingston, the biggest challenges came in travelling into the more rural areas of Jamaica. In these parts locals are less used to seeing film crews so crowds became an issue, while travelling with a large crew was in itself a challenge.

Maxine Walters, of Maxine Walters Productions, said: “We filmed in an exquisite mountain village but we faced traffic problems as it’s basically a one-road system that you’re navigating with 100 crew members and so you create your own traffic jam. You have to be careful with the logistics or you’ll end up working against yourself.”

The production worked with traffic officers to help ease the process. Working with locals brought some unique issues. A naturalistic look was needed for people appearing as extras but local residents would insist on appearing in their Sunday best in the presence of Usain Bolt. Walters added: “When Usain chooses to film in Jamaica where he trains it immediately brings work for several hundred people so they love him for it!”

Working with locals brought some unique issues. A naturalistic look was needed for people appearing as extras but local residents would insist on appearing in their Sunday best in the presence of Usain Bolt.

Francis concluded: “The police we had were great as they not only had to help us move from one location to the next as we made company move after company move throughout the day, but also to stop and hold traffic while we did take after take. Make sure to use local Jamaican crew who know the locations, the local people, the customs and the culture.”

The crew filmed on Canon 5Ds and a RED, while golf carts and vans were used for faster tracking shots. Additional spots will be launched later in 2011.