Written by Richard Farish on Mar 22, 2011. Posted in Contributors / On Location

The Arctic – a filming survival guide

[singlepic id=567 w=600 h=250 float=]In March 2010 I was selected as DoP for a new series on ITV1 called 71 Degrees North. I was to be one of seven camera crews on location, working with a large variety of filming platforms including climbing ropes, snowmobile, helicopter, dog sled, skis and also underwater.

Before you begin an expedition into any extreme environment you must always allow plenty of time for preparation and planning. Once you are on location, supply or replacement of equipment can often be difficult and very expensive. A spare camera body may appear in the budget as a costly addition but look at it as part of your insurance cover to get the production made. Always ask yourself the same question at every stage before and during the filming – what if?

Technically in the Arctic the main issue is the cold which affects battery life, plus cables becoming brittle and getting condensation in the kit when moving from the cold to the warm. Once water gets into a lens it may be a struggle to clear a fog spot. Placing hand warmer pads on the end of the lens or, if possible, using a hair dryer to heat the lens back at base, sometimes helps clear the fog.

It’s always worth calling ahead to find out where you're storing the kit and having it correctly set up before you arrive.

It will, however, probably mean a trip to the workshop on your return to strip down the lens to make sure no water remains.

When we were camping out on location in Norway we kept our cameras in their Portabrace soft cases outside the tent and then covered them with a ground sheet. This kept them out of the wet whilst remaining acclimatised. Back at base our kit room was in a garage with no heating next to the accommodation to avoid a big temperature increase. If I was in a hot country, I would keep the kit in a room with the air con switched off. It’s always worth calling ahead to find out where you're storing the kit and having it correctly set up before you arrive.

On a recent trip to the Arctic with explorer/presenter Bruce Parry and Indus Films for the BBC, we experimented with using a dry bag to make the transition from cold to hot more gradual. We bagged up the camera in the cold and moved it inside to the warm and left it sealed in the bag for about 15 minutes to allow the air inside to heat up.

It was vital that the camera was totally free of ice, snow or any water before going into the bag as this can then add to the problem as it heats up.

I always have a small brush like a paint brush and a travel towel handy to check the kit is free of debris and water. We had mixed success with the bag but I think the theory is good and it did help us on many occasions.

Cables do become brittle below certain temperatures and ‘arctic blue’ cabling has been developed to deal with this issue. The cable sheath remains flexible in low temperatures and therefore avoids breaking. Clear plastic on camera covers also becomes brittle and begins to break as the temperature drops.

You can use a polar jacket for the camera, which works well to help protect your kit but does restrict your operating ability. Most cameras tend to generate a lot of internal heat once they are running, so may not need such a cover until they are left switched off for a while.

We used the SONY XDCAM disc camera in -35 degrees Celsius (well below the manufacturer’s stated limit) and it coped very well without a polar jacket. Our sound recordists used disposable hand warmers to assist their solid state recorders in dealing with the low temperatures.

Batteries hate the cold! Keeping them in the warm can extend their life span so having them in your sleeping bag overnight then wrapped up in your pack during the day is a good option. Try and avoid taking your old set with you - they won’t last long.

Filming on snow and ice

The natural increase in light due to the reflection of snow or ice can make exposure very tricky but it can also give you a much-needed extra stop near the end of the day. If you are filming up close, you must expose for your subject and accept that your background may burn out as a result if predominantly white. If possible find a background that can break up the white, such as trees, etc.

If you are lucky enough to have clear blue skies, then always try to use your polarising filter. The colour and contrast definition of your picture will be greatly improved. A polarising filter can continuously vary the amount of polarised light that passes through it. In doing so it can darken a blue sky and make white clouds appear whiter and, most important in snow shooting, reduce glare on snow and ice. Finally it can help you to 'see' through water by reducing reflections on the surface of the water. These filters are most effective when the sun is at an angle to the direction of the camera rather than straight ahead or behind.

You can also cool down the colour temperature near sunset to get the best out of the orange glow, while keeping a strong blue background color.

Landscapes can be improved by using ND grad filters such as .6 or .9. Sometimes an ND grad filter can be used to reduce the brightness of the snow at the bottom of the frame. Be creative and also consider using warmer filters such as a coral grad to really lift a sunrise or sunset. You can also cool down the colour temperature near sunset to get the best out of the orange glow, while keeping a strong blue background colour. 4.3k often works well once the sun is low enough.

The golden rule must always be to listen to the experts and these are often those who live and work in the environment in question on a regular basis. Four of our crew on 71 Degrees North and the majority of our safety crew were from Norway with the addition of our UK Head of Safety Alex Bohanna from Remote Trauma, who, as an ex-royal marine commando, had extensive experience of working in the cold of Norway.

The local knowledge of the location and environment can help you and the production team achieve realistic goals both safely and in many cases with a lot more comfort. Sleeping in a tent in -35 degrees Celsius, plus the wind chill taking it down a further ten degrees, you tend to hang on to every word of advice you are given to make the experience more pleasant.

Your sleeping bag tends to get quite crowded as you also have your water bottle, clothes, batteries and insoles from your boots keeping warm with you. Your insoles may have some moisture in them and if not kept warm, they can form ice which is not a great way to start your day when getting kitted up.

One of the toughest and often most laborious factors to filming in the cold is how much extra personal survival kit you need to be wearing and constantly changing as you start to get hot or cool down. Alex always recommended before a trek that we ‘start cold and get hot’. This helped to avoid building up a sweat, which quickly freezes once you stop moving.

The Arctic weather is also extremely unpredictable. We were often told by our Norwegian colleagues that in Norway if you don’t like the weather just wait an hour.

The Arctic weather is also extremely unpredictable. We were often told by our Norwegian colleagues that in Norway if you don’t like the weather just wait an hour. How right they were. You could be standing in blazing sun stripping off your jacket and hat then before you know it the clouds appear, the temperature plummets and the race begins to keep warm. Not easy when you are also trying to make a television programme. Always allow a minimum of an hour to get dressed and ready in the morning. It always takes far longer than you think. Then you need to boil water and eat before you head off on your next day of adventure. 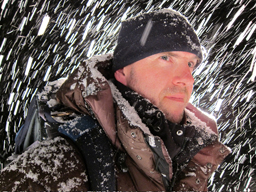 Working in any extreme location is a 24/7 job, requiring all the team to participate. Every member of the team must be prepared to look after themselves and also contribute to any non filming activity such as making camp, cooking, helping get a fire going and so on. After a long day you just want to stop but not in a location like the Arctic. Hopefully you have selected a team who know each other well and have experience in working in extreme environments. This team will get the job done, look after themselves and each other, so everyone gets through it.

Being a cold environment you would naturally think that you wouldn’t dehydrate that much but each time you breath out you are exhaling water vapour from your body at an alarming rate. Carrying at least a litre of hot drink with you is essential in getting through the day. Dehydration and hunger can also increase your chances of getting hypothermia, which is a very dangerous condition and can result in an emergency situation and possible evacuation.

Looking after yourself and helping to avoid simple medical problems can massively assist the success of a remote location shoot. Should one person become ill or injured this can begin a series of events, which begin to involve more and more people from the team, which in turn may jeopardise the filming progress. Injury and illness can and will occur but minimising the potential personal risk is preferential on any expedition.

Be prepared and adjustable for any eventuality, both personally and technically whilst in the Arctic.

It is a fantastic part of the world to experience but as always never underestimate or disrespect its ability to bite back!