Written by Murray Ashton on Apr 1, 2011. Posted in Interviews

Carl Wood was born in the UK and was amongst other things a marine salvage boat captain and cow-herder in France before becoming a Location Manager in Australia.

He got his first taste of location filming on Polanski’s Macbeth on location in Northumberland where he worked as an extra for six weeks. In 1974 Carl bought a one way ticket to Australia where his film career started as a stage hand for ABC Television in Melbourne. He is married with a daughter and lives in Concord, New South Wales.

Do you principally work in NSW or have you shot elsewhere?

What was your luckiest career break so far?

Being offered the position of assistant location manager on The Matrix.

Do you have a type of production (features, TV, Commercials, stills) you prefer to work on and if so why?

In general I prefer to work on feature films. The jobs are longer and tend to break down into specific periods - research, scouting, consolidating ideas, refinement, permissioning, shooting, and wrapping. Whereas, in TV, these things are often all going on at once and can become something of a hum-drum melange.

In film, there is usually a lot more scope to contribute to the creative process. I also love travelling, and sooner or later most films end up taking me out somewhere into the amazing Australia countryside. Very large budget productions sometimes give one the chance to push the envelope in terms of organising massive location days, particularly in the city, and it always gives one a sense of achievement at the end of the day.

What tech gear and vehicle can you not do without and how many miles do you do a year?

In terms of tech gear, my main tools are, or course, a digital camera and a laptop. I have two compact cameras and a DSLR. I also make extensive use of a photo tracker and a hand-held sat-nav/radio unit.

For the last 10 years I've driven a Toyota Camry Wagon, which I've just traded in with 360,000 km on the clock. My new (secondhand) car is a Subaru Forester.   Most of my driving mileage is fairly local - within a radius of 300km or so. Any further and it's usually more efficient in Australia to take a plane and pick up a hire vehicle, otherwise you're on the road for hours, and a remote breakdown could jeopardise the job in terms of meeting deadlines.

Broken Hill on the western side of NSW, for instance, is a 14 hour drive one-way. If I'm going to go off-road I hire a large Toyota, Nissan or Mistubishi 4WD.

What have been some of your most difficult location assignments to date and why?

The requirement on Superman Returns was not so much difficult as interesting. The young Superman had to run and jump through a field of tall maize with the Kent Farm in the background. There was a drought on, we were out of season, and we had a ten week deadline. We worked out that four hectares (approx 10 acres) would suffice with the rest being CG'd in.

So we found a hardy variety of maize used more for animal feed, and planted our four hectares. We laid in irrigation pipes, hitching them up to four or five 20,00 litre tanks and a pump, and we semi-trailered water up from a muddy waterhole in a creek some kilometres away.

An old couple, who were acting as informal security and living onsite in a small caravan, kept the pumps going 24 hours a day and the corn grew beautifully and on time. As I write this I have one of the cobs on a shelf in front of me, impaled on an old filing spike. Some say it was the most expensive corn ever grown. The landowner told me his wife cooked some but it was tough and tasteless - still, it looked the part.

From a location managers point of view what is the easiest locations you have shot at and why?

Rural areas are always the easiest to shoot in. Country Australia people are very welcoming and they will go out of their way to help. Local authorities like to see a film crew in town as they provide a big boost to the local economy. On Superman Returns we built the Kent Farm on a property about half an hour out of Tamworth, which itself was an hour's flight from Sydney. At the other end of the budget scale, for the Tropfest inaugural feature film September, most of the film was shot in a patch of country north of Yass, which itself is about one hour north of Australia's capital, Canberra.

On the other hand, the authorities in the Sydney metropolitan areas are also very supportive, and since the launch of the NSW Local Government Filming Protocol most filming requests are assumed to be possible, unless there are very specific reasons for a refusal. Also, most locations coming under the jurisdiction of local authorities are now costed on a cost-recovery basis, so fees are very much reduced. It has given filming in NSW a whole new feeling of freedom and acceptance.

What tips and advice would you give anyone considering filming in NSW for the first time?

Contact a local location manager and/or contact the Production Attraction Unit of Screen NSW - you never know, you may be eligible for some some budget incentives!

What specific locations truly capture the feel and mood of NSW?

For me it's the bush, and in the local vernacular that word can take on many identities - it could be miles and miles of beautiful deserted beaches, dense rainforest, arid outback plains, massive fields of grain, rolling green hills, high mountains and even snowfields with snowgums in leaf.

The area of NSW is 802,000 sqkm  - that's nearly ten times the area of Britain, so there is room for a massive amount of variation.   Others might claim the iconic Harbour Bridge, Opera House, Bondi Beach, or even a dry and dusty outback town with one pub and a servo (petrol station) that doubles as shop, post office, food take-away, video shop, etc.

What productions have you been working on in the past year?

I started last year of a NSW Tourism TVC which took me to dense rainforest in the north of the state at Dorrigo, the vinyards of the Hunter Valley about two hours north of Sydney, the pristine bays and beaches around Jervis Bay where the trees meet the sea (pictured below), and the extraordinary countryside about an hour SW of Canberra known as The Monaro, where giant, rounded boulders dot the rolling countryside (pictured above). 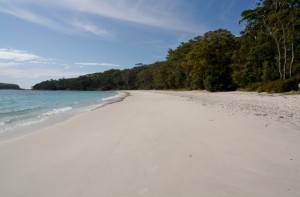 rmits from National Parks, vignerons, local councils, rural property owners, and even the Military, as we used a military airfield to base a helicopter for the beach scenes.

In March I started work on Fury Road (Mad Max 4). The location supervisor had been on for some months - we often work together on large productions - so a lot of the legwork had already been done.

Those familiar with the Mad Max genre will know the apocalyptic backdrops with no vegetation. Previous Mad Maxes have shot out in the west of the state, where there are vast areas of bare red soil plains with endless horizons, as well as rugged hilly countryside.

When the plains were originally scouted they were true to expectations as the area had been in drought for 10 years or so, however, the drought broke with heavy rainfalls and the plains slowly greened up from month to month - not really Mad Max scenery! Eventually the plains turned into a garden of Eden with wildflowers up to your knees and some to your waist - I have never seen anything like it. Now grass has filled in any red soil gaps in the green carpet.

I have since taken a job on a new long-form ABC TV drama series set in the offices of the NSW crown prosecution. We start filming 22 episodes from late January 2011 through to August.   The previous two years I worked on two series of the very popular Underbelly, which deals with the Australian underworld. The drama is based on true stories.

What do you enjoy most about being a Location Manager?

The location manager/department is the only department on a production working on both sides of the fence - interfacing the production with the outside world. This creates many challenges, and when it goes right, the shoot has been a success, the location wants you back again and the producers too, then you know you've done your job well and it gives a sense of achievement.

Of course, travelling and meeting people is one of the job's great perks, there are lot of Australians (or their ancestors) who have come here for a million different reasons and everyone has a story - but there is always a deadline eventually.

I also enjoy the responsibility - you're often out there by yourself making decisions involving sometimes thousands of people and millions of dollars. Australia is an extraordinarily interesting country to travel in, and it constantly entices you on and on.

Food is another enjoyment - when I go to new areas I usually ask what the local specialty is. It might be yabbies (small freshwater crayfish), a particular cheese, salt-bush fed lamb, German pastries, and in one town that shall remain nameless, a cheese-slaw sandwich (grated cheese and carrot). I gave that one a miss!

What in your experience are the best crew and cast friendly hotels in NSW?

I have found that cast and crew are always welcome at hotels throughout Australia, but the best welcome would always be at an outback hotel, particularly in remote Parachilna in South Australia, where Ross and Jane Fargher have attained a special place in the Australian Film Industry's hearts.

Of course, outback hotels don't always have the latest technology, and technical communications can sometimes be a challenge, however, things are improving rapidly in that respect.

What do you do when you are not working?

I like to spend time with my wife and daughter, and I enjoy gardening. Ironically I also have a big interest in photography.

If you hadn't become a Location Manager what would you have done instead?

When I was a child I wanted to be a farmer, but when I left school this somehow got forgotten.  Since I've been in Australia I've had a lot of different work experiences, and apart from working in the camera and editing departments I have also worked outside the industry. I somehow fell into restaurant cooking for a couple of years, and landscape gardening, amongst other things, and I've had several freelance photo-journalist articles published in magazines and some very short fiction. Writing is something I'd like to develop.

For a year I worked as a video consultant with in the Aboriginal Development Division of the Northern Territory Government, and my job was to train two Aboriginal video crews and produce a two-monthly Aboriginal Video Magazine which was sent out to about 250 communities across the Territory. It was a great chance to work with indigenous Australians and to visit remote communities, and that's something I would certainly do again if the opportunity came.

Though I never thought about it when I was younger, and if I had my time again and was not married, I feel I would like to work as a photographer in conflict areas - at least as long as I could handle it!