Cadbury has continued the offbeat comedy of its Glass And A Half Full series with a new location shoot in China. The spot shows a group of Buddhist monks sitting in silent prayer in a remote monastery until some marauding balloons help bring out their dance moves.

Ladakh in India was seriously considered as a filming location but in the end the team couldn’t find suitable interior spaces. The spot was eventually filmed in China’s Sichuan Province 3,000 metres above sea level and in Zhejiang Province outside Shanghai. All the extras had to be shaved and taught to dance, while the actor playing the head monk also had to learn how to rap in English.

As soon as you leave the city centre language is quite a challenge, even in the hotels. We did insist on bilingual keys for the crew. Everything is a challenge as the answers to all requests are initially ‘Not possible’.

Language barriers were one of the main issues throughout the shoot. Melina McDonald, an Executive Producer with Bouffant, said: “As soon as you leave the city centre language is quite a challenge, even in the hotels. We did insist on bilingual keys for the crew. Everything is a challenge as the answers to all requests are initially ‘Not possible’. 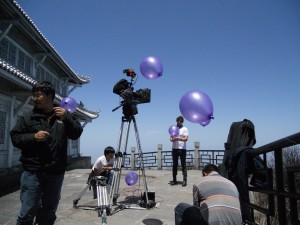 "It takes a lot of perseverance and pushing to ensure that you get A-grade production. Helicopters and the red tape that surrounds them are really quite difficult as all aerial permissions have to go through the military.”

Nick Dodet, an Executive Producer with P.I.G. China, says: “[The monastery] sits on top of a cliff rising over 1,000 metres and it creates its own micro-climate. It snowed non-stop for over three weeks in March when we had planned to shoot it, so we had to reschedule these particular shots.”

McDonald added that costs have to be carefully monitored, especially in the city where they can rapidly spiral, while a translator is necessary in rural areas. McDonald concludes: “Do not believe everything that is promised – it is all negotiable until the last minute.”