Shifting gear from the literary adaptations that made his name, Joe Wright’s latest feature is Hanna, the story of a teenage girl raised in the wilds of Finland as a fighter and assassin. The film makes striking use of its locations, with script rewrites organised around the places they found.

We first meet the 16-year-old Hanna (Saoirse Ronan) in the frozen wilderness of Kuusamo in northern Finland. The script was altered slightly to accommodate the snowy landscapes on offer in the region and the production spent five days filming scenes designed to reveal Hanna’s forest upbringing.

Maija Laine, with the North Finland Film Commission, said: “Kuusamo is located right at the Russian border and is one of the most snow-secure places in Finland. Kuusamo also has one of the biggest ski resorts in Finland - Ruka - which was the place where the crew was accommodated. All the locations were no more than 30 minutes from the hotels, which made Kuusamo logistically a great location.”

Kuusamo is located right at the Russian border and is one of the most snow-secure places in Finland. Kuusamo also has one of the biggest ski resorts in Finland - Ruka - which was the place where the crew was accommodated. All the locations were no more than 30 minutes from the hotels.

Hanna was the biggest film production that Finland has ever seen and the local industry had to make some adjustments to deal with the scale of the operation, but the challenge was met.

Aleksi Bardy, Managing Director of Helsinki Filmi, which serviced the shoot in Finland, commented: “It is not exactly a [massive] industry in Finland but the locals do have some experience. Landscapes are just like Lapland, but a bit more accessible. The timeframe was very, very narrow from go-ahead to shoot. Getting things done with only a few weeks’ notice was an issue. 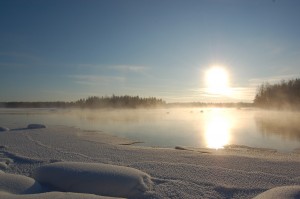 “We lack the culture of caravans for actors, so arranging these proved to be difficult. People and businesses in the Kuusamo area did a great job adjusting to schedules, working long hours and seven days a week to make everything happened in time.”

Hessu Tönkyrä, one of the film’s Location Managers, remarks on the climate issue: “Cold winter weather was the main challenge. Temperatures could be as low as -37 degrees Celsius and the amount of snow presented a challenge of its own.”

Wright was keen to use real snow, which was what brought on the Finland leg of the shoot. Scenes set outside the forest cabin that Hanna shares with her father Erik (Eric Bana) were filmed in Bavaria and had to be shot quickly as springtime approached.

Markus Bensch, production executive in charge of locations at the film's production partner Studio Babelsberg, said: “The hut scenes were filmed in Bavaria around 3,000 feet above sea level. Finally we had to add about 16 tons of artificial snow to the set as we were facing the results of the climate change. As we saw the snow melting we decided to do the wider shots in Finland instead of using CGI shots in Bavaria. The North Finland Film Commission was of great help to find exactly what Joe wanted and to match the Bavarian location.”

From Finland the story switches to Morocco and the desert landscapes of Ouarzazate in the south-central part of the country. As with the winter wilds of Finland, the desert makes a huge impact on screen, with minimal changes made to the filming locations. Around 200 local crew members were employed through Marrakech-based servicing company Zak Productions.

After having seen the Spreepark, [an original] museum meeting [sequence] got a major rewrite mainly for the reason that no scriptwriter could imagine a place like that in the middle of Berlin and no producer would agree to build such a place - good for us it just stood there!

A highway and a campsite in Essaouira west of Marrakech were used to double for Spain. The heat of desert filming proved a challenge, as did getting the equipment to the more remote locations, but otherwise there were no problems.

Adam Richards, the film’s Location Supervisor, said: “In Essaouira we used the port as it was and also filmed the Spanish gypsy camp here. We had to get special permission to film in front of the mosque and to graffiti the walls of nearby dwellings. On the highway scene in Marrakech we added the bull sign on the side of the road.” 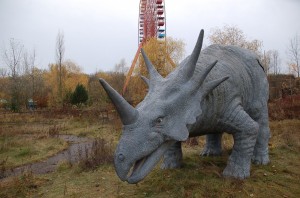 Much of the drama also takes place in Germany. Here Wright initially put aside the script and gave the locations department lots of freedom to identify places they thought would simply look good on-screen.

The search resulted in the distinctive Berlin Velodrome, which ended up being used as the film’s CIA headquarters. They also decided to use the Spreepark, an abandoned amusement park in northern Berlin used in the film’s finale, which impressed to such an extent that the script’s ending was rewritten.

Bensch commented: “After having seen the Spreepark, [an original] museum meeting [sequence] got a major rewrite mainly for the reason that no scriptwriter could imagine a place like that in the middle of Berlin and no producer would agree to build such a place - good for us it just stood there!”

Two months of negotiations were needed to secure the Spreepark for filming. This was because property ownership on the site itself is split between several individuals and organisations, including the City of Berlin itself. It was worth it though - the sequence is among the most eye-catching in recent cinema.

Bensch concludes: “I’ve been in the location business here in Berlin for 20 years now. I always wanted to show the Spreepark to a wider audience, but somehow the right project never came along...”