For its latest ad campaign vehicle manufacturer Mitsubishi chose to test the All-Wheel Control system on its Outlander vehicles on the Yungas Road in Bolivia, which has a reputation for being the World’s Most Dangerous Road. Part of the action was caught on a 360-degree camera.

World’s Most Dangerous Road takes a documentary approach similar to Mitsubishi’s World Records piece earlier this year, with the production team driving the cars along Bolivia's perilous Yungas Road to see how they cope.

Mike Burdick and Mike Bokman, part of the creative team at 180 LA, said: “We set out to prove Outlander has the world's most advanced All-Wheel Control, so we felt we had to search the world to find a road we could prove it on. We certainly looked at many roads, but none offered the challenges of the world's most dangerous road in terms of weather, road quality, terrain and the sheer spectacle.”

The road is spectacular and beautiful on film, but not for the faint of heart. It requires a great deal of planning and iron will to persevere and get the footage you need. You can't have too much prep time.

The North Yungas Road runs for nearly 40 miles from La Paz to Coroico in western Bolivia. It reaches a height of 15,000 feet through the Andes, has no guard barriers and is frequently no wider than ten feet across. It’s known locally as El Camino de la Muerte (Road of Death) and has killed hundreds of people over the years.

John Quinn, of Boxer Films, said: “The road is spectacular and beautiful on film, but not for the faint of heart. It requires a great deal of planning and iron will to persevere and get the footage you need. You can't have too much prep time. Allow a good deal of time for the logistics, permits, shipping and so on.”

Yecid Benavides Jr, of Artistas Latinos, added: “The road hasn’t been commonly used for regular travel for about five years now because of the danger involved. It’s mainly used by bikers and tourists. Also, there’s an asphalt road now on the other side.” 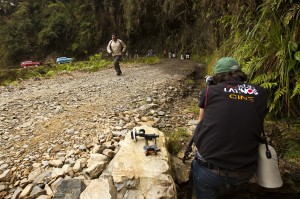 Part of the action was captured on a 360-degree camera from a company in Pittsburgh called EyeSee360. The fitting captures panoramic video and feeds to an HD camera. Specialist software then closes the feed loop so that web users can scroll 360 degrees with their mouse when viewing the footage online. So far in the wider industry the camera’s been used mainly for sporting events and the occasional music video and commercial.

The rest of the crew and equipment – including Red MX cameras and a Sony AF 100 – were shipped from a variety of places. Burdick and Mike Bokman commented: “The crew and equipment was flown in to La Paz from all over the Americas - Brazil, Peru, Argentina, Mexico and the US. Then everything had to travel two hours just to get to the top of Yungas Road, on a road that is also quite dangerous, through foggy mountain passes reaching over 15,000 feet and over roads that are potholed and partly unpaved.”

In addition the team built a special ‘Bolivian Arm’ so that the camera could be suspended over the edge of the precipice. While the height was the most obvious danger, the altitude also posed a challenge. The lack of oxygen slowed everyone’s responses and actions, while the weather conditions could change in a matter of minutes.

At the top you're surrounded by some of the highest peaks in the Andes, snow-capped mountains, free-roaming llamas and alpacas, waterfalls from the glaciers. And the bottom of the road is warm and tropical, not far from the Amazon Rainforest.

Filming permits came from film commission Consejo Nacional del Cine and the local municipality. Benavides said: “The police helped us blockade roads during shooting. It irritated some of the bikers but generally we had their co-operation. Usually there’s no space to turn around on the road – you have to take advantage of the occasional wider spot that appears every mile or so. Insurance was complicated to arrange too!”

Burdick and Bokman concluded: “It's actually one of the most stunning locations you could shoot. At the top you're surrounded by some of the highest peaks in the Andes, snow-capped mountains, free-roaming llamas and alpacas, waterfalls from the glaciers. And the bottom of the road is warm and tropical, not far from the Amazon Rainforest. It's definitely worth the difficulty getting there.”