Cider brand Strongbow has braved roasting temperatures filming the commercial for its new Gold brand on location in South Africa. Hero shows ancient archers sending arrows into an orchard and crushing the apples within. These scenes crosscut with drinkers in a modern bar.

The archer scenes were shot during a day of filming in Darling on the west coast of South Africa about an hour from Cape Town. The production picked a farm containing a salt pan and braved January temperatures of more than 40 Degrees Celsius.

We had 200 actors in leather and PVC costumes, and there was no coastal breeze as the location was so far inland. We had a huge air-conditioned tent to provide some shade and there was plenty of water on standby.

Max Brady, a Producer with Maxfilms Ltd, said: “We had 200 actors in leather and PVC costumes, and there was no coastal breeze as the location was so far inland. We had a huge air-conditioned tent to provide some shade and there was plenty of water on standby. Some of the horses carried hidden water supplies to make things easier when the scenes were being filmed.” 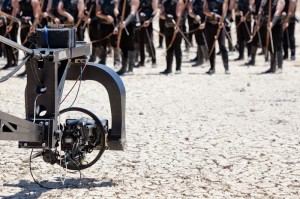 With the archery being such an integral part of the ad, it had to look just right. Actors comprised the first rank of archers as filming focused on them. Karen Hultzer, the South African Olympic archery champion, was hired to give brief lessons on how to hold and draw the bows convincingly. The second rank was made of actual archers who already knew what they were doing.

As it turned out the heat was more potent for the men with bigger builds. Liz Bullen, an Executive Producer with Atomik Pictures, said: “We were filming in January and we knew it would be hot, but it was ten degrees above the norm. Temperatures peaked at 42 – one more degree and nobody could have legally worked in those conditions. The bigger bodybuilders suffered the most there.”