King’s Speech Oscar-winner Tom Hooper has headed to Spain to helm a new advertising campaign called To Life, Love and Loot for rum brand Captain Morgan. In the first spot, Dive, Captain Morgan diffuses an attack on his pirate ship by impressing the enemy with his diving skills.

The US, Portugal and Mexico were all scouted for good replica pirate ships. Franke Rodriguez, Brand Director at Anomaly, said: “We were driven by the location of the pirate ships. We were looking for the right look and style, as well as something that would be the quickest to prep. We identified 12 different ships that could be film-ready within a month.”

We were looking for the right look and style of galleon, as well as something that would be the quickest to prep. We identified 12 different ships that could be film-ready within a month.

El Puerto De Santa Maria in Cadiz, Spain, was eventually chosen for four days of filming and doubled for the Caribbean island of St Croix. The replica of the 51-metre 17th Century Galleon Andalucia is one historic ship based in Cadiz and was built and is owned by the Nao Victoria Foundation of Spain. 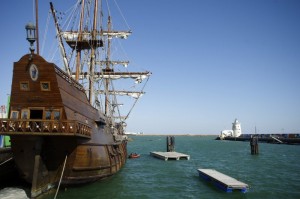 Gordon Mackinnon, of Goodgate Productions, said: “The ships were both in good condition so we aged them and replaced the sails. The sea was very calm over the four days, which included one day of filming in the open ocean. There are small engines on the ships but the manoeuvres are still long and drawn out.”

Finding space to work on the ship was a challenge, especially for the make-up, hair and costume departments, who were dressing and outfitting all the pirate extras and needed to operate on the boat. The ship’s actual crew became extras as well, as the script called for the firing of the galleon’s cannon, so the production benefitted from having people around who knew how to use them.

Andrew Loevenguth, Production Head with Anomaly, said: “We were based in a remote location that wasn't in proximity to major cities, so getting crew as well as our talent to the area was a challenge. Co-ordinating logistics (travel, meals and accommodations) was quite significant.

The galleons were both in good condition so we aged them and replaced the sails. There are small engines on the ships but the manoeuvres are still long and drawn out.

“Add to that the fact that we were shooting in a port as well as out on the open ocean and there were significant safety considerations – wind, shooting boat to boat, protecting the cameras and so on. The wind was a major challenge during the shoot as we were in an area well known for its windy conditions.”

The production had taken out weather insurance and the daily shot lists were re-ordered a few times because of the strong wind. Rodriguez concluded: “As with anything, don’t underestimate the importance of your initial location scout. Have back-ups planned well so that if you have problems in one place you know exactly where you’re going. It helps keep everyone more relaxed on set.”

The next spot, Glass, will be launched in the next few months.