A beach in Mauritius was eventually chosen as the setting for a new commercial for Kellogg’s breakfast cereal Special K, after a globe-trotting scout. The spot promotes the company’s online slimming plan and shows a group of women showing off their swimming costumes on the beach.

The production decided against a Maldives shoot because of the lack of filming infrastructure. Leo Burnett said: “We filmed in Mauritius for a couple of reasons. It was the right location with good weather forecast and it was cost-effective. We considered the Bahamas, but it was too expensive so it was ruled out early. Cape Town didn’t have the right locations and was also expensive. In Kenya the costs were okay, but the locations weren’t as good. In Malaysia and Costa Rica we found good locations, but travel time makes them more expensive.”

As there is no current local infrastructure to film on 35mm in Mauritius, most of the equipment and crew had to come in from South Africa, a system which has been used for years with the many Bollywood feature films which are shot there.

In the end they filmed next to the luxury hotel Maradiva on the west coast of Mauritius. Filming permits came from the Mauritius Film Development Corporation and the beach authorities.

Andreas Habermeyer, a Producer with Identical Pictures, said: “The biggest challenge was that due to the exotic shooting location a lot of people were flown in. We got five models from the US and Britain. In total we had 17 people from the agency, the production and cast coming to the island. We found two hotels where they all fit in. 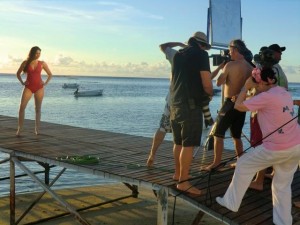 “We thought we would have some problems with the 35mm Kodak stock and camera due to the heat and the sand, but everything went very well.”

Mauritius has more local digital filmmaking facilities than those equipped for 35mm production, so most of the equipment for this spot was imported from Cape Town and Johannesburg.

Kate Arton, a Producer with Production International, said: “As there is no current local infrastructure to film on 35mm in Mauritius, most of the equipment and crew had to come in from South Africa, a system which has been used for years with the many Bollywood feature films which are shot there.”

Habermeyer concluded: “Mauritius has developed itself as a filming destination due to many Indian feature films being shot on the island and Mauritian crew are around 20% cheaper compared to South Africa.”