A company in New Zealand has developed a new stabilised camera designed to make aerial filming easier and more efficient. Shotover’s new rig has a lightweight carbon fibre build and can be carried on flights as excess luggage, making it easier to transport to filming locations around the world. 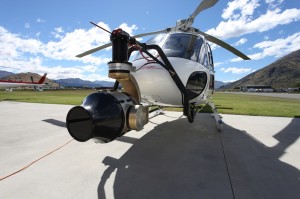 Shotover has been testing the prototype for several months, with improvements being fed into a revised design. There are plans to build ten separate units that will be sold rather than loaned. John Coyle, the company’s Managing Director, originally established Cineflex in California before moving to New Zealand and setting up Shotover in Queenstown.

Coyle said: “Some of our design goals are to produce the lightest and smallest of these high-end [aerial] systems and allow our systems to be carried as excess baggage on flights. This is something unique compared to Spacecam, Pictorvision and Gyron. We have also managed to design a properly working system using sensors and gyros that are not export-restricted, which allows the systems to be taken nearly anywhere in the world without having to obtain difficult to get export licenses.”

Some of our design goals are to produce the lightest and smallest of these high-end [aerial] systems and allow our systems to be carried as excess baggage on flights.

In addition, the new Shotover rig has been designed to accommodate digital cameras like the Arri Alexa, RED Epic and Sony F35. Shooting digitally allows more flight time, while the reduced weight of the rig itself allows for more passengers and fuel in the helicopter.