Written by Rowena Carr-Allison on Jun 14, 2011. Posted in On Location

Philadelphia: TLG visits the home of Rocky and The Sixth Sense

Sharon Pinkenson has been Executive Director of the Greater Philadelphia Film Office (GPFO) for 19 years and has transformed Philly into a regular movie maker’s destination. Sharon markets her city and its surrounding area, while co-ordinating all things production-related. 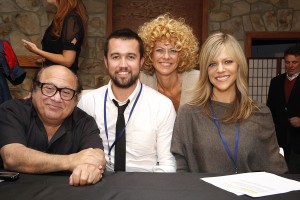 Today Sharon - pictured second from right with (l-r)  Danny DeVito, Rob McElhenney and Kaitlin Olson, co-stars on It's Always Sunny in Philadelphia - is also responsible for www.film.org, which lists a small sampling of locations available (though she recommends coming to them direct for help with a custom-designed Reel Scout package) and publishes the Greater Philadelphia Film & Video Guide. She says this “offers a comprehensive local database of anything a filmmaker might need, professionally and personally, to get the job done efficiently and economically.”

Exuberant, fun and dedicated, Sharon and I meet over lunch at an Italian brasserie. She’s worked on so many movies it’s dizzying. From Philadelphia, which bagged Tom Hanks his first Oscar, through to Twelve Monkeys, Fallen, Oprah’s Winfrey’s Beloved, Transformers: Revenge of the Fallen and the Rocky franchise. Then there’s the back-catalogue of Philly-raised M. Night Shyamalan, including Unbreakable and The Sixth Sense. Recent projects include The Lovely Bones, Blue Valentine, Limitless and Safe with Jason Statham.

Sharon is an expert on her local locations. She grins: “One of our best assets is our diversity of locations. In addition to keeping our historical locations intact, we can offer anything from Main Line mansions and 101 college campuses to urban grit, rolling farmland, distinctive period neighbourhoods, modern skyscrapers, middle America towns of every type and more.”

In addition to keeping our historical locations intact, we can offer anything from Main Line mansions and 101 college campuses to urban grit, rolling farmland, distinctive period neighbourhoods, modern skyscrapers, middle America towns of every type and more.

The most popular are the college campuses, prisons, Boat House Row, the Italian Market and those infamous ‘Rocky Steps’ at the Philadelphia Museum of Art. Then there’s Sharon’s particular favourite - City Hall with its beautiful courtrooms, hallways and architecture. Other city sights regularly seen are the Amtrak’s 30th Street Station, Independence Hall, the sports stadiums and restaurants like the glamorous Buddakan, Rouge, Butcher & Singer and Del Frisco’s.

Philly’s also doubled for other cities such as New York (Limitless, Safe), Washington DC (How Do You Know), 1880s Cleveland (Beloved) and even Paris (Transformers: Revenge of the Fallen). 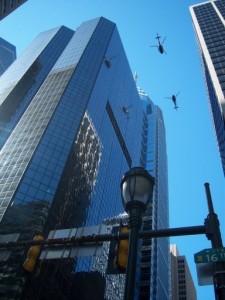 A central appeal to Philadelphia filming is the permitting set-up. “No permits are required to shoot on the streets of Philadelphia if you are not affecting traffic,” Sharon says: “With those specific sections - Fairmount Park and Independence National Historical Park areas - that require permits, the film office cuts the red tape and walks the producers through the process.”

Sharon also takes credit for working on various Pennsylvania tax programmes: “Today Pennsylvania offers a 25% Film Production Tax Credit for qualified film production expenses incurred in the Commonwealth. The transferable tax credit is available for feature films, TV shows and series, as well as commercials intended for a national audience. In order to qualify for the tax credit, a minimum of 60% of the total production expenses must be incurred in Pennsylvania.”

The GPFO created 4,000 new jobs in 2009. Sharon smiles: “Since 1992 we have experienced USD3.5 billion in economic impact through production spending. These developments have ensured that the movie business will remain one of our region’s most important industries.”

There’s studio space available in the city too. The Philadelphia Civic Center became the first municipally-owned soundstage in the US and was used for productions like Beloved, The Sixth Sense and Unbreakable. This has now closed but Sharon teamed with Paramount Pictures who invested in the Navy Yard as a film centre by developing the 100,000 square-foot former seaplane hangar into a visual effects stage for Shyamalan’s latest project. In addition the Sun Center Studios in Chester Township in Delaware County offers more facilities.

Today Pennsylvania offers a 25% Film Production Tax Credit for qualified film production expenses incurred in the Commonwealth. The transferable tax credit is available for feature films, TV shows and series, as well as commercials intended for a national audience.

Sharon says: “The Navy Yard, the development of Sun Center Studios with its 220,000 square-foot purpose-built stages and 30,000 square-foot production office space plus shops and mills, as well as the fully-functional postproduction and visual effects facility, have all contributed to the ever-evolving movie business in our city.”

So what’s the key to Philadelphia’s success, beyond Sharon’s boundless energy and enthusiasm? She says: “Philadelphia is one of our nation’s oldest cities and as such has intact buildings from each period of architecture, allowing us to double for other American cities and European cities too. Another advantage is our convenient location amidst the East Coast Corridor, just an hour and ten minutes by Amtrak to New York, two hours to DC and one hour by car from the Atlantic Coast!”

With a generous tax incentive, terrific locations, studio facilities and a helpful film office Philadelphia looks set to maintain its position as a top filming location in the eastern US.