The number of audiovisual projects filming in Seville in the first five months of this year increased by 13% on the same period in 2010, according to figures from the Sevilla Film Office (SFO). But the majority (74) of the projects were Spanish, with Germany and the UK the next highest with eight each. 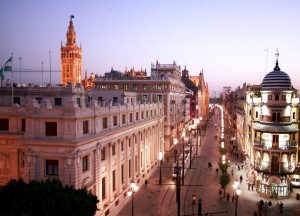 Other projects came from more than a dozen other countries around the world, but most of these countries only visited once during this five-month period. Altogether more than 90 productions chose the Spanish city and on average they stayed seven weeks rather than the four weeks reported in 2010.

Reliably good weather, an efficient permitting process and strong work from the Seville External Promotion Association (which the SFO is a part of) are being credited by the film office for the 13% increase.

Eduardo Corcuera, Director General of the Sevilla Film Office and the Seville External Promotion Association, said: “Film companies find in SFO a body that acts as a go-between for them and the city institutions involved, thereby saving them time and streamlining the process.

74 of the projects filmed so far this year originated in Spain, with Germany and the UK the next highest with eight each.

“In addition, the Seville External Promotion Association has also conducted a substantial promotional campaign for Seville as the ideal set to film in at film festivals and international audiovisual fairs, and also ‘door-to-door’ visits to various companies. This has led to the marked increased in productions in Seville.”

Spain remains one of the only countries in Europe that doesn’t yet offer a national filming incentive scheme. This is likely why location filming in Seville is dominated by domestic production, although Elsa Martinez, new Chairwoman of the Spain Film Commission, told TLG earlier this year that the country hopes to compete more effectively with its neighbours soon.