Doritos films on location in Mexico for Dip Desperado commercial

Tortilla chip brand Doritos has embraced the image of the Western gunslinger and filmed its new commercial on location in Mexico. Dip Desperado charts the fictional life of Esteban Ortega, a Mexican peasant who finds fame and glory flicking Doritos rather than ‘slinging’ a gun.

The spot was filmed in the town of Bernal in the state of Queretaro, two and a half hours’ drive from Mexico City. Bernal is part of the Mexican Government’s Programa Pueblos Mágico (Magical Villages Programme), which is designed to encourage tourists to visit historical towns and villages in the Mexican countryside.

This town appealed to the director because he was looking for a dusty Western look, with something interesting in frame at the time of flipping the Doritos.

Conchita Taboada, of Spectrum Films in Mexico City, said: “This town appealed to the director because he was looking for a dusty Western look, with something interesting in frame at the time of flipping the Doritos. This location has the dusty western look and the Peña (rock mountain), which adds richness to the scenery.” 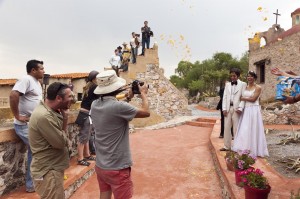 Independent didn’t consider filming in any other country, although they scouted extensively looking for the dusty and rustic rural feel before settling on Bernal as a filming location. Heat was the biggest issue during the shoot itself.

Mexico can be perceived as being a dangerous place to film as drug cartel violence tends to be the only news from the country that’s reported internationally. The reality is that while Mexico has its problems, troubles are focused in the north in the towns on the US border.

Addressing this issue, Jason Kemp, a producer with Independent Films, said: “Quite simply, they didn't have any bearing on the process. Filming in Mexico was a highly satisfactory experience.”