Feature drama The Devil’s Double has filmed in Malta and Jordan, using each country as a stand-in for Iraq. Set in the late 1980s, the film tells the fact-based story of a lieutenant in the Iraqi army who is forced to be the body double of Uday Hussein, eldest son of Saddam.

With Iraq itself still essentially a no-go for filmmakers, the production team considered countries like Spain, Tunisia and Morocco before opting to make their base in Malta. Michael John Fedun, with Corrino Media Group in Amsterdam, said: “In Jordan there wasn’t enough of a filmmaking infrastructure or crew, but I’d shoot there in a second if I had a bigger budget as it’s a great place. Valencia didn’t work as a double for Iraq and there weren’t enough local crew. There wasn’t enough local infrastructure or crew in Tunisia either, and there isn’t a film commission there.

We scouted Morocco but funnily enough during costing it became clearer that Malta was cheaper. Plus Morocco has been shot to death and the baksheesh (tipping or bribery) was just frustrating in order to get anything done.

“We scouted Morocco but funnily enough during costing it became clearer that Malta was cheaper. Plus Morocco has been shot to death and the baksheesh (tipping or bribery) was just frustrating in order to get anything done. There was a lot of red tape and the film commission was tricky. Language was also a problem everywhere.”

The crew took advantage of the existing Arabic feel of Malta, from the look of the locals to the colour of the buildings. Signage was the main dressing change, while the ocean was digitally removed from the background of some shots and replaced with desert to complete the Middle East illusion. 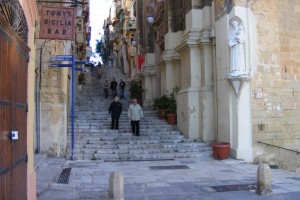 Joseph Formosa Randon and Mark Sansone were the film’s Location Managers. Randon said: “We filmed in many locations. The national football stadium, three hotels - the Excelsior, the Suncrest and the Westin Dragonara - an old people’s home, an old palace (the Palazzo Parisio) as well as the old Fort Ricasoli. I think in each case the Production Designer believed the locations could double for the actual Iraqi locations we were trying to reproduce.”

Malta is distinctive for having a rich architectural heritage that can nonetheless double for a lot of different places and The Devil’s Double team took advantage of this. The capital city of Valletta is a maze of alleyways and streets and as a UNECSO World Heritage site hasn’t changed much in 500 years. Places like Fort St Elmo’s Point and the Palazzo Parisio offer distinctive and yet helpfully generic medieval backdrops.

Sansone commented: “[Fort Ricasoli] is a 'Knights of St John'-era fortification at the mouth of the Grand Harbour that offers space, variety and control to all films that work in Malta. This must be one of the most popular filming sites. Huge open areas for set builds, lots of old vaulted rooms, halls, passageways, ramparts and so on act like a studio. It is isolated from the hustle and bustle of residential areas and yet is a stone throw away from anywhere else on the island.”

The capital city of Valletta is a maze of alleyways and streets and as a UNECSO World Heritage site hasn’t changed much in 500 years.

Most of the equipment was sourced locally or imported from nearby Italy. The most specialist piece of kit was an Aurora motion control camera system. This was used for scenes where the main characters Uday and Latif appeared in the same frame, as they were played by the same actor, Dominic Cooper. The Aurora is small and portable, and can be used in tight locations. 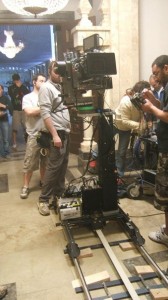 Stephen Scammell, of London-based supplier Kontrol Freax, said: "In this instance we freighted the gear by air, but we can also bring it to many destinations as excess baggage. Another useful aspect of the system is that it can travel in flight cases and be built on location in under an hour, which means the gear and tech does not need to arrive before the normal crew call.

"Because the system is programmed by learning the live camera move, filming on location is made easier by reducing the amount of time needed to programme each shot."

Although discounted as a primary shooting location, Jordan was used for some second-unit footage involving more expansive desert scenes. The production imported all their own equipment but got a lot of support from the film commission, with the biggest challenge turning out to be the desert heat in August.

Summarising his feelings towards Malta, Sansone offers: “There's good variety in Malta, most places are film-friendly and with adequate planning ahead one finds that these locations can be as flexible as necessary.”