Deodorant brand Axe has put a modern slant on a biblical classic and built an ark in Buenos Aires. The spot shows a local preparing for a storm by building an ark with a gym, a dance floor and some sleek living quarters. A spray of deoderant attracts a troupe of supermodels to help fill the space.

The finished ark seen in the spot’s closing seconds was a two-metre-long scale model filmed on location against a green screen.

Buenos Aires doubled for generic US suburbs and the ark construction was actually done for real on different scales. Building work took about three weeks once the designs were sorted and the shoot itself was finished in three days. 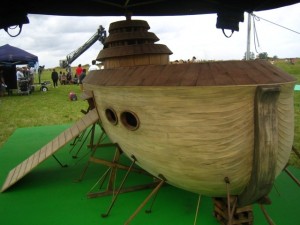 Soledad Bottaro, of LabHouse in Buenos Aires, said: “The spot took place in Buenos Aires outskirts mainly in an empty field surrounded with middleclass suburbs, with an old warehouse inside that we used for doing all the interior construction. This way we could focus on all the ark scenes - both interior and exterior - all in one place.”

The finished ark seen in the spot’s closing seconds was a two-metre-long scale model filmed on location against a green screen. Last year Axe filmed an eye-catching commercial in Split, with angelic supermodels falling from the sky above the historic location. Even Angels Will Fall doubled the Croatian city for Italy.