An unsigned band. On wheels. Rolling down a steep hillside in Brighton covering Feeder’s Buck Rogers; surely one of the more unconventional gigs in recent music history. It was filmed in the south-coastal English town by UK-based sports drink brand Lucozade for new commercial The Arrival.

The production team scouted all over the UK with a pro-skater in tow who tested a lot of different hillsides. London, Glasgow and Bristol were all serious contenders but Brighton stood out because it offered the steepest hilltop – Albion Hill is even known as ‘The Widowmaker’ to the local skater community – and it had a good mix of buildings on the route. Being easily accessible from London helped as well.

Brighton stood out because it offered the steepest hilltop – Albion Hill is even known as ‘The Widowmaker’ to the local skater community.

Matt Hichens produced the shoot for Mustard: “There were easier locations available, but we wanted something challenging that moved away from the big-city look. Brighton offered a nice juxtaposition between the different kinds of housing and buildings along the route and we could get there quickly! Some of the other places we scouted were shallower inclines with less pace and a smaller sense of jeopardy.” 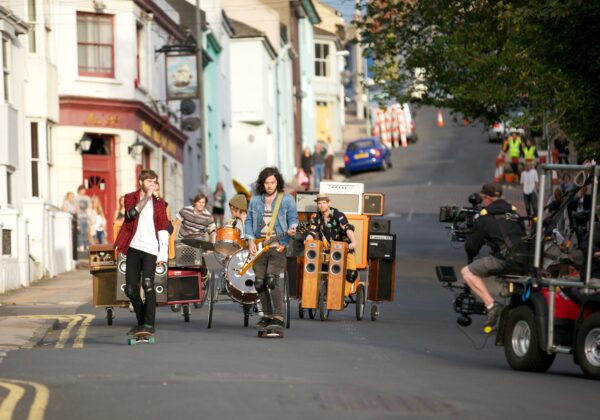 Subtle safety systems were built into the rolling rigs so that the band members had a degree of control as they went. The drumsticks with attached brake levers were the kind of improvisation the production was working with.

Ben Carter was the project’s Location Manager: “We needed it to look like something that simply wasn’t safe to do. We liked the kooky feel of London’s Portobello Road, but on a hill. We had a 14-man road closure for four days, negotiated through a lot of meetings with local resident associations. Then we bought out shops along the route and used inconspicuous places for the crew as you see everything.”

We needed it to look like something that simply wasn’t safe to do. We liked the kooky feel of London’s Portobello Road, but on a hill.

Around 160 different unsigned acts auditioned to be part of the project over a three-day period. The James Cleaver Quintet ended up winning the gig by proving they could sing, rock and, crucially, roll, all at the same time on separate rigs.