Beer brand Heineken has turned a Portuguese cultural centre into an airport for its new ad, Gorgeous. When a beautiful woman fends off one sleazy admirer at an airport bar, a more resourceful guy uses a friend’s lipstick on a Heineken bottle to prompt a conversation through a sly ‘misunderstanding’.

We chose it for its size and similarities in structure and materials to that of a real airport. We looked into using other conference halls and airports but the permissions were too restrictive.

It wasn’t practical to try and get permission to film for several days in a real airport. Instead, production company Stink chose a distinctive cultural centre in the town of Ilhavo in northern Portugal that they’d already made a note of preparing for a previous project. 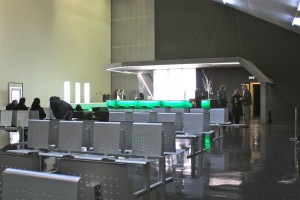 Astrid Edwards was a Producer on the shoot: “We chose it for its size and similarities in structure and materials to that of a real airport. We looked into using other conference halls and airports but the permissions were too restrictive. We had seen the cultural centre in a previous recce and realised that it was a good choice for creating an airport using the structure of the building as a shell.”

The production team arranged with the local council to have the centre shut down for a week and then they set about with the transformation. Nick Roycroft, of Page International Services, was a Producer on the project: “We had to construct the bar, the large departure boards, various airport signs, the buggy and so on. It was quite a major build but the local council up there was very helpful.”

It was an eye-catching project for the locals as it was the biggest shoot to have ever visited them. With the help of the council and centre staff it became a relatively stress-free event.