Scottish warriors have been replaced with suburbanites looking for a break from the norm in a Braveheart pastiche from Swedish furniture manufacturer Ikea. Have a Go shows homeowners charging across a field clutching Ikea furniture as they rebel against the threat of home-furnishing normality.

The farm terrain, doubled with carrying furniture and running at full tilt, was probably the hardest challenge for our extras.

The spot was filmed on private farmland 40km outside Sydney and the actors faced tough conditions on each shoot morning. More remote locations further inland were considered, but transport costs for 150 extras over a two or three-day shoot were too expensive. In the end the private farmland met the director’s needs. 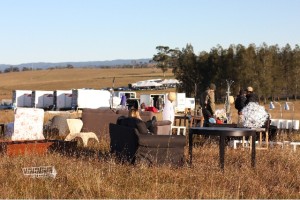 Sam Long, a Producer with Goodoil Films, said: “The farm terrain, doubled with carrying furniture and running at full tilt, was probably the hardest challenge for our extras. They did an amazing job and most of them had never been on set before. The mornings were bitterly cold with below-zero temperatures.”

A GFM crane fitted with a Scorpio head caught the footage. Long added that the farmland wasn’t necessarily an inexpensive option, but there was a comprehensive pre-production period to make sure everything went to plan.