Although some scenes were filmed in Wales, Melbourne became the principal double for the UK, with nearly a dozen different locations throughout the city used for filming. These included the former Royal Women’s Hospital, the Commission Flats of Kensington and The Rope Factory. Judicious CGI was used to alter the background cityscapes and blend London with Melbourne.

One of the major changes and something that gave us a terrific look was made under the Old Titles Office in Queens Street, Melbourne. We were able to manipulate the vaults to resemble a 1980s Dubai palace and its cellars.

Tony Winley, was a Producer on the film: “One of the major changes and something that gave us a terrific look was made under the Old Titles Office in Queens Street, Melbourne. We were able to manipulate the vaults to resemble a 1980s Dubai palace and its cellars. Tonnes of sand were brought in and concrete walls were added to achieve the specific look of the director and designer.”

The city’s Little Collins Street and Spring Street doubled for Paris. Essendon Airport ten kilometres from the city centre was used as an Omani airport and the You Yangs, granite ridges on the Werribee Plain south-west of Melbourne, became the main Omani shooting location. Yarra Valley was actually the only location used as itself, as a place Statham’s character uses for refuge. 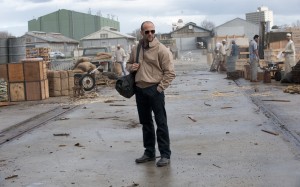 Jenni Tosi, Acting CEO of Film Victoria, said: “To our knowledge this is the first time Melbourne has doubled for Oman, but Victoria’s locations are so diverse that the state has doubled for many locations over the years, including Rhode Island (Don’t Be Afraid of the Dark), Boston and New York (Knowing), Iwo Jima and Okinawa (The Pacific) 1950s Maine (Charlotte’s Web) and Africa (The Bank Job).”

Killer Elite stars Statham as a former SAS soldier who springs into action when his mentor is kidnapped. Robert De Niro and Clive Owen co-star. Australia has attracted only a handful of international productions in recent years, with many producers being discouraged by the fluctuating dollar. With the Steven Spielberg-produced Terra Nova committing to a season-long shoot in Queensland and Fox Studios in Sydney recently securing Alex Proyas’ Paradise Lost, the country could be looking at a production resurgence.

Killer Elite will be on general global release from late September 2011.