Consumer goods giant Procter & Gamble has journeyed to the California desert for a special music video promoting its detergent brand Cheer. Australian band Strange Talk was sent to Adelanto near Los Angeles to perform their single Climbing Walls for a new interactive promotion.

El Mirage Dry Lake Bed was chosen because it’s close to Los Angeles. It’s already a popular place for car commercials because of the hard flat surface on offer. The artificial chessboard was built specially for the two-day shoot and the art department worked through the day and night before shooting to fit each square into its steel frame and set up artificial palm trees.

We had a great Art Director working with our Director Radical Friend to design the checkerboard oasis. It was custom-built to look like a real chessboard surrounded by swaying palm trees and coloured ponds of water.

Carlo Trulli executive produced the spot for Spy Films in Toronto shot the video: “We had a great Art Director working with our Director Radical Friend to design the checkerboard oasis. It was custom-built to look like a real chessboard surrounded by swaying palm trees and coloured ponds of water. Everything went extremely well, but the heat, dust and wind would sometimes get in the way.” 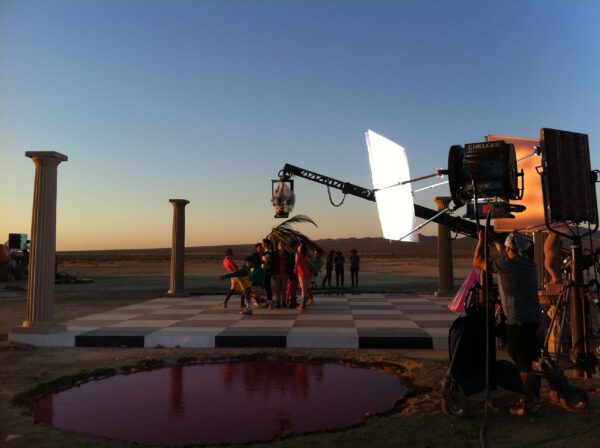 While the lake bed makes for a visually-striking setting, the video itself has also been designed as an interactive piece. The video is primarily a commercial for detergent brand Cheer, which has the tagline “We dig colour”. To tie in with this, viewers are invited to click on colourful items on the desert set while they watch the video for a chance to win them.

Jason Wiedemann, Cheer Brand Manager at Procter & Gamble, said: “We wanted the video to bring to life a celebration of colour and the desert seemed like the perfect backdrop to really contrast the colourful band, dancers, clothing and set.”