Marcus Nispel’s remake of Schwarzenegger fantasy classic Conan the Barbarian has filmed across Bulgaria. Namibia and Croatia were both considered as filming locations for a few scenes, but practicality meant that Bulgaria ended up hosting the full shoot.

The filming schedule was split between multiple stages at Nu Boyana Film Studios and locations including the north coast of the Black Sea and the Vitosha Mountains. Filming permits for the location work came from the Ministry of Nature and Water, and from the Ministry of Culture.

A challenge was also to properly accommodate all the extras, stunts and so on in isolated areas, so the camp was huge with big tents and portable showers. We had days with over 600 men on set.

Vesselin Karadjov of Commodore 7, a Production Manager on the film, said: “The main requirement from the director was to have something which could fit this mythical Hyborian world. This meant we needed locations to be free from any human interference for 360 degrees. Of course we were trying to be as close as we could to a big city because the crew included stunts and extras, and was huge, especially for the battle scenes with horses.” 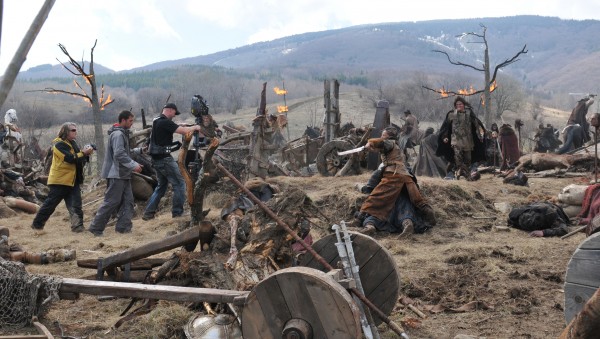 One of the biggest tasks was building a full Cimerian village in a field outside Sofia. Construction started in March in temperatures of -10 Degrees Celsius and by the time everything was ready in June temperatures had climbed to +30. A road had to be laid to the location and as the weather grew warmer melting snow in the Vitosha Mountains began to cascade downhill creating a quagmire of mud.

Karadjov added: “A challenge was also to properly accommodate all the extras, stunts and so on in isolated areas, so the camp was huge with big tents and portable showers. We had days with over 600 men on set. Wherever we shot we had to provide stables for the horses and the other animals used in the shoot. For many of the locations we had to do our roads or at least repair the existing ones.”

Bulgaria doesn’t offer any filming incentives but manages to remain competitive with its European neighbours by undercutting general production costs. The sequel to Sylvester Stallone’s action movie The Expendables is the latest high-profile production to be confirmed for shooting at Nu Boyana Film Studios.