Written by James Peak on Aug 26, 2011. Posted in General Interest

Joe Biggins runs the Inflatable Crowd Company (ICC) and is a man whose innovative approach to problem-solving has put him in charge of a new kind of film servicing company. He’s worked on films like The Fighter, The King’s Speech and Steven Soderbergh’s upcoming pandemic thriller Contagion.

A few years back Biggins was a guy producers went to when there was a production problem that desperately needed fixing and for which no department wanted to take responsibility:

“The trouble is, being a problem solver sounds cooler than it actually is. I was the guy they called when they had something tricky, but often mundane, to fix. I got a lot of work as a ‘special projects consultant’ for feature films.”

They said ‘Hey, we need really huge crowds - any ideas?’ At first I experimented with 2D cardboard cutouts, but however carefully we positioned them, as the camera came around the racetrack bends, you could see the edges. It was clear a 2D solution was not going to work.

In 2002 Biggins got a job in the art department for pre-production on Gary Ross’ horse-racing drama Seabiscuit and he was landed with a big problem to solve: how to create the gargantuan horse-racing crowds needed to show the scale of Seabiscuit’s triumph. The brief was for 7,000 extras for the racing scenes, to be shot at Keeneland Racetrack in Lexington, Kentucky:

“They said ‘Hey, we need really huge crowds - any ideas?’ At first I experimented with 2D cardboard cutouts, but however carefully we positioned them, as the camera came around the racetrack bends, you could see the edges. It was clear a 2D solution was not going to work. It had to be 3D, but we didn’t have the money for that number of extras. So it was a natural step to say ‘I’ll get some manikin’ to beef up the crowd.” 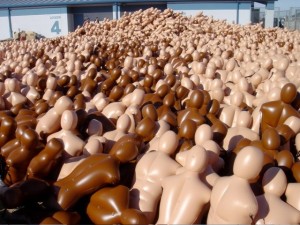 A simple idea, one might think. But after a period of research at Universal Studios it was clear that the number of manikins needed was untenable, as no company was providing them to the film industry. Biggins made a decision that changed his life and put him into the driving seat of this new sector:

“I thought I’d do it myself. I decided to go inflatable, which was a decision that made itself, given the need for kit that can literally travel light. I got in touch with some plastics factories and had a sample life-sized doll made up. I had to keep it totally secret from everyone on set, as I thought there must be a reason why this had not been already done and I must be missing why it would not work. Then I went in to a meeting with the Seabiscuit art department and producers, with my life-size doll dressed up like a Great Depression character. That was a crunch moment…”

To Biggins’ delight, nobody could explain why this would not work. Producers loved the idea and Universal ordered 7,000 inflatable dolls to populate the grandstand.

“On the crowd shoot day I was so busy tending to the dolls that I didn’t even see the dailies. Suddenly people were slapping me on the back and I knew the scenes had worked. Suddenly all the anxiety turned to excitement for the future. I could see we had created a new niche industry, just from that moment.”

Obviously people are skeptical that latex dolls are going to work as extras. I don’t try to persuade, I just turn up with one in the right kind of costume. Once they see the texture and quality, they get it immediately.

Biggins was able to parlay this early success into bookings on the biggest of projects, using that oldest of tools: word of mouth.

“Obviously people are skeptical that latex dolls are going to work as extras. I don’t try to persuade, I just turn up with one in the right kind of costume. Once they see the texture and quality, they get it immediately. Now our repeat clients are really high, as more and more film people get the idea.”

So far, the biggest gig ICC has had was Ron Howard’s Cinderella Man, which booked 11,000 dolls as a crowd watching boxing matches. This job took over two weeks on location to set up all the dolls, with a crew of seven.

“We can set 2,000 dolls in a day, now that we’ve revised and refined the process. It’s a job that keeps you pretty worked out. We can carry eight to ten dolls at a time and we can walk ten to fifteen miles per day - just in and out of stadiums or sports halls - carrying heavy loads. They might be in situ for a month or a week, or it might be one shot. The set up and takedown are hard work and we have lots of specialist dressers and movers to get it done efficiently.” 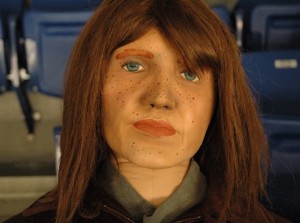 ICC specialises in costumes for the dolls and they can arrive on set in anything from modern military outfits to period wear. Although the dolls offer a 60-90% reduction on the price of a real crowd of extras, Biggins is very firm on the limitations to what they can be used for:

“One major limitation is that the dolls don’t move! We do masks, texture and costumes, but at the end of the day they aren’t animated like people are. We have to have real extras in the crowds to create movement and to bring it all to life. Where you put the real extras totally depends on the camera – whether it’s moving or static. Over the last few years we have developed some techniques to populate the scene and yet draw the eye towards the real people. Sometimes they are clumped around, sometimes on their own. What is clear is that strategically placing extras brings the whole crowd of dolls alive. We do a lot of consultancy with cinematographers, art dept and assistant directors to use the inflatable crowds in the right way.”

ICC is based in Santa Monica, California. A sister company in the UK sprang up hot on its heels, run by Production Manager Danny Burraway, who first met Biggins on the set of Bronson, the stylised biopic of British gangster Charles Bronson that launched Tom Hardy’s career. Here they provided 400 dolls for a prison scene. The US and UK businesses share resources and recent successes of the UK company include Clint Eastwood’s Hereafter and The King’s Speech, where 1,500 dolls populated the memorable opening scene set at Wembley football stadium.

Burraway’s take on the company’s early success is simple: “Dolls create the crowd mass, while the real extras - placed in front of the inflatables and intermingled throughout - provide the life by moving or cheering. Texture and attention to detail is really crucial to making this illusion seamless, so we provide clothing and accessories, realistic faces, wigs and hats to match the period and look of the real extras.”

One major limitation is that the dolls don’t move! We do masks, texture and costumes, but at the end of the day they aren’t animated like people are. We have to have real extras in the crowds to create movement and to bring it all to life.

But the real question is, can anyone tell? Is it possible to tell the difference between live extras and dolls on screen? Biggins speaks honestly:

“I don’t want to answer that question! It compromises the craft if I tell you I‘ve ever noticed a doll on screen! Let me put it like this: you won’t be able to spot them, ever. If I have, it’s because I know exactly where to look. I can honestly say I have never seen anything at all glaring, as the cinematographers and directors are so skilled at drawing the eye of the audience on screen.”

It seems odd that nobody thought of this elegant and cheap solution before, given the expense of location filming. Perhaps though, the company’s success will be short-lived, given the rate of progress of visual effects? Not so, says Biggins:

“This is a viable way forward for producers, even as VFX gets cheaper and more convincing. We’re a long-term prospect and however good VFX is, it’s not real. You will always need real people on set and interacting with a real environment. We’re film purists! We are going to be around as long as real people are on set!”