Thailand as a location for filming

Nobody who saw the eye-popping skylines of Bangkok, coupled with the astonishing beach paradises of The Hangover Part 2 is likely to leave Thailand off their location shortlist. The exposure of Weerasethakul's Palme d'Or-winning Uncle Boonmee Who Can Recall His Past Lives hasn’t hurt either, perhaps explaining why so many producers looking for a versatile, flexible, can-do kind of place have turned toward Thailand recently.

Shanghai was supposed to be a Weinstein pre-World War II noir thriller filmed in the Chinese port of the same name. But with weeks to go, perhaps because of unease with the film’s examination of the backdrop of Chinese relations with the Nazis just before Pearl Harbour, the Chinese authorities revoked access, prompting producers to scramble to relocate to both London and multiple locations in Bangkok and surrounds. They must be glad they did, for locations at Hua Lamphong Railway Terminal, Si Racha, Chachoengsao and Samut Songkhram did much to imitate Shanghai, proving Thailand can be an effective double.

We want studio executives and producers that have not thought of shooting here to realize there are no boundaries for their imagination to come alive in Thailand.

Bangkok has recently doubled for New York, Medieval Europe, modern China and New Orleans. Ridley Scott chose Chiang Mai in the north of the country to shoot parts of 2007’s American Gangster, as did Sylvester Stallone for his fourth instalment of Rambo in the same year. Werner Herzog’s PoW drama Rescue Dawn also cheated Thailand for Vietnam in 2005.

But the highest-profile production in the last year has showcased Bangkok in a stellar performance in its favourite role: as a glossy party town with beach paradise add-ons, in Todd Phillips’ The Hangover Part 2. Wanasiri Morakul, Director of the The Thailand Film Office, is clearly delighted with the way things are progressing:

"Now we have solid recognition from Hangover 2 to use as support, we can expand on that. Foreign filmmakers have been coming here for 50 years. We have the infrastructure and professional crews who work really hard. We also believe that in the next five years we will see more of an increase in the business because the Government understands the business now. We want studio executives and producers that have not thought of shooting here to realize there are no boundaries for their imagination to come alive in Thailand.”

The whole filming process in Thailand for overseas productions has been streamlined in the last few years to make it easier, faster and smoother to film here.

The Thailand Film Office is keen to build on this with its new campaign aimed at high-end global filmmakers, who can now ‘Unleash Their Imagination’. A high-profile launch at this year’s Cannes looks like capitalizing. Supol Sripan, Director General  of the Department of Tourism and overall boss of the film office, reported that 530 movies were shot in 2010, generating over USD60 million - double the production level of 2009.

Ivor Fitzpatrick, who runs Asiahire Bangkok, a production services company that commonly works with Discovery, National Geographic and The History Channel, is buoyant about how much easier things have become: 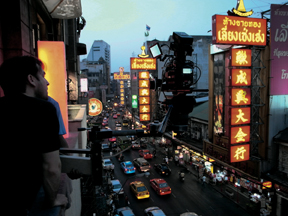 “The whole filming process in Thailand for overseas productions has been streamlined in the last few years to make it easier, faster and smoother to film here. The Government had been discussing tax incentives and rebates for foreign film productions filming in Thailand that had already passed the Thai Cabinet and were finally implemented in May 2011. Thailand has also been signing the Double Taxation Treaty with a number of countries. The treaty is designed to prevent foreign filmmakers of member countries from being taxed twice in Thailand and again in their home country. In general, all income earned in Thailand is subject to a personal income tax ranging from 5% to 37% for an individual depending on his/her incomes; and 30% corporate income tax of the corporation net income.”

In addition, companies that return to Bangkok to film can get VAT rebates of an extra 7%. In 2010 Thailand introduced an income tax exemption for foreign actors, which means they now only pay a 10% flat rate on income earned in the country.

However, the big one would be confirmation of rumours of a forthcoming 25% tax incentives for foreign productions. But Andy Sim, Producer at Pop Films Asia, is not entirely convinced this will come to pass anytime soon:

“Not at this stage. Given the very low pricing already being offered, a 25% rebate would seem unrealistic. Clearly though, the Government has been kind towards filming. It just wants to uphold a good image of the country and be more discerning about the script content.”

Thailand has got the price/quality relationship exactly right, being the second cheapest place to shoot in the whole Southern Hemipshere.

Confirmed initiatives include a ‘One Stop Service Centre’ to assist foreign productions in obtaining shooting and work permits. This is now usually done within three working days.

“Thailand has got the price/quality relationship exactly right, being the second cheapest place to shoot in the whole Southern Hemisphere (after Uruguay!). I always suggest to clients to shoot on Thailand’s beaches instead of the Caribbean. They are the same price - or perhaps Thai beaches are a little cheaper - but Thailand is about a thousand times more professional and rentals are better! One note though. I would say it's dangerous to sell Thailand for outdoor shooting between the end of August and the end of November, as the rainy season destabilises the chance of good shoot days.”

Tropical paradises, like the island of Phuket, which also hosted Roel Reine’s action feature The Marine 2 at the Adamas Resort, are an obvious draw. But producers should not forget the wealth of locations available beyond the beaches and the cities. The north of Thailand is mountainous and densely wooded, while the central plains feature one of the world’s most fertile rice-growing areas. The southern peninsula, featuring the legendary Koh Samui area, has a spine of mountains interspersed with fertile plains, jungle and temple ruins.

I have never known it so busy in Bangkok! We are shooting eight commercial campaigns this month, with clients from the US, Saatchi in Singapore and also Saatchi from Japan.

It’s not just feature production that is keeping Thailand’s crews busy. There is a healthy commercials industry, hosting crews from all over the world. Coco Greenwood, a producer with Big Blue Films, has been based in Bangkok since 1995:

“I have never known it so busy in Bangkok! We are shooting eight commercial campaigns this month, with clients from the US, Saatchi in Singapore and also Saatchi from Japan. We just finished a Norwegian project with Einar and another with Bouffant from South Africa. I guess we are so busy because the value to clients has never been better. We have the city itself, the beaches and the mountains, so clients keep coming. We have astonishingly cheap, well-trained crew who are really experienced across all genres.” 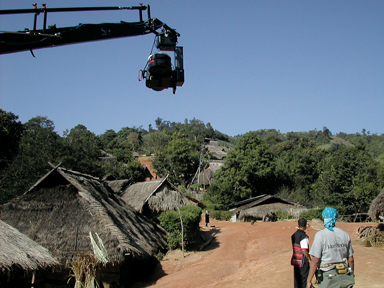 Fantastically atmospheric locations, solid crew, first-class accommodation and food, decent studios (like Bangkok-based Moonstar Studio and the Gecco Studio Complex), fine equipment and post-production houses are all reasons why Thailand is drawing in work from as far away as India, US and the UK, and if prices remain as cheap as they are now, Thailand is set as a global filming destination for producers who need to make their money stretch a long way.