Chevrolet has travelled to the Mojave Desert in California to shoot mountain landscapes for its new ad. The Warehouse shows a man touring a storage facility where all the missed opportunities of life are kept and catalogued, before he heads outdoors to be greeted by a fleet of Chevrolet vehicles.

The sets for the interior warehouse scenes were built at Downey Studios in California, which offers 250,000 sq ft of floor space in a single building, as well as a suburban street and more than 100,000 sq ft of office space. A location for the exterior finale was a little more difficult to find.

We were looking for a setting that suggested freedom, nature and classic Americana. Manzanar was also good for us because the tarmac of the airstrip is very old and blended into the surroundings.

Sylvaine Mella produced the project for Stink Paris: “For the exterior it was quite a challenge. In order to have all the cars moving side by side, I knew it had to be something like an airstrip. But not just any airstrip! It needed the same type of rugged texture and we were also looking for a dramatic mountain backdrop to suggest the great American outdoors. Airfields are in limited numbers and not necessarily available for films.” 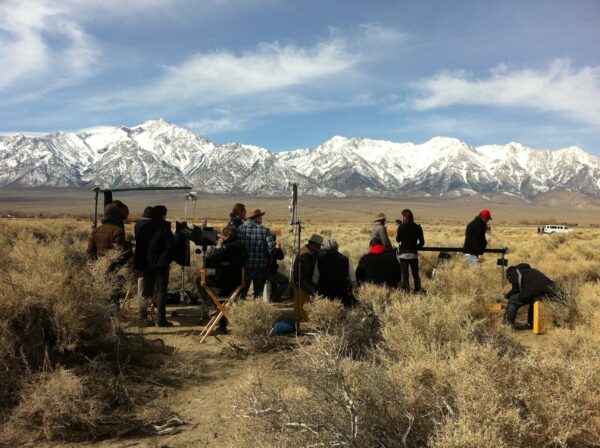 A scout checked out every airfield within a six-hour drive of Los Angeles before Inyokern Airport near Lone Pine in the Mojave Desert and a former airstrip at Manzanar were eventually chosen. Lone Pine used to be a popular location for filming Westerns. Filming changes for Chevrolet were minimal at both locations as the natural look of the places were their main appeal.

Andrea Stillacci is founder and president of Herezie in Paris: “We were looking for a setting that suggested freedom, nature and classic Americana. Manzanar was also good for us because the tarmac of the airstrip is very old and blended into the surroundings. That enabled us to drive the cars without any environmental impact, as well as fitting the rugged themes of the piece.”