Written by Murray Ashton on Sep 29, 2011. Posted in Interviews

Chiana was born and raised on the Greek island and is lovingly referred to as the 'Mayor of Mykonos' by the locals for her efforts to raise the island's profile in the industry.

She spent many years working as a photographer and with her father in the property business before she decided to combine her two great loves, photography and Mykonos, to become a location fixer.

Tell me about Mykonos

Mykonos is part of the Cyclades Islands in the Aegean. It is relatively small (9,000 inhabitants) so everywhere is a five to 15-minute drive with some of the most beautiful beaches and light in the world. Thanks to being so uber-cosmopolitan we are fully equipped for all situations. There are daily direct flights from all over Europe and Athens is only 20 minutes away by plane!

What locations are most commonly used by film and TV crews in Mykonos?

Everywhere! But number one would be the 50-odd outstanding beaches - The Bourne Identity, Shirley Valentine, Kings of Mykonos and many more TV series, ads and photography campaigns have used them. 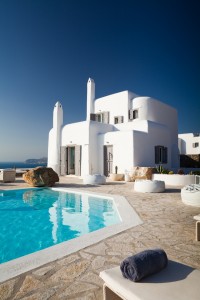 What are the rare, more unusual locations that our readers would not necessarily associate with Mykonos?

On a fashion shoot in a villa by a pool in a beaufort eight wind. The model had to wear lots of different hats. Obtaining permits to shoot in the sacred ruins of Delos. Think Stonehenge, The Vatican, the Sistine Chapel!

What types of production do you work on most and what has been filmed recently in Mykonos?

I mostly work on photo shoots and commercials. The last big production to film here was Peter Andrikidis' The Kings of Mykonos in 2010. 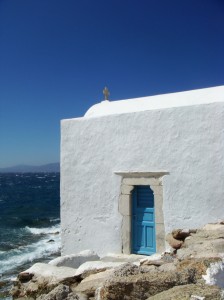 The weather is glorious. We have unbroken sun for seven months of the year with the best light in the world. It can be very windy, however, and allow heaps of time to arrange shoots on historical sites.

Mykonos airport has flights every day with easyJet from most places direct in Europe, also Aegean and Olympic. Or via Athens and then a 15-minute flight to Mykonos.

When you are not location scouting or shooting what do you do when you have time off and what would you recommend film crew and cast to do to relax in Mykonos?

I continue taking pictures every chance I get. I manage two properties on the island which are perfect locations as well! Enjoy the good weather and try not to get too miserable about Greece's economy.

I would recommend numerous things for my cast and crew when they are here as I also work a little differently then other location/production managers as I host the crew and cast the whole time 24/7, and offer valuable concierge service for the after-work fun!