Kuala Lumpur has become Mitsubishi’s playground in its new commercial for the company's latest SUV. Played as a short action film, Shopping shows a driver taking his Mitsubishi on a trip through some remote landscapes on what turns out to be a scenic shopping trip.

Production house Luminous only had two days to film so they needed a lot of visually interesting and under-filmed Kuala Lumpur locations that were within easy reach of each other – there was no room in the schedule to spend a day travelling. As a result of the time constraints the chosen locations needed minimal set dressing too.

The production team ran into a problem with rapidly rising water levels in a river. The SUV ended up stranded for five hours while a group of rescue vehicles worked to retrieve it.

Karen De Silva executive produced the spot for Luminous Ink: “We were specifically looking for harsh and varied four-by-four terrain for the car to perform. We needed the mountains and river to help tell the GPS story, while the beach and plains were used to show that distance had been travelled by the guy on his shopping trip. The city location at the end was used to communicate that the husband was ecstatic to be able to drive his Mitsubishi once more.” 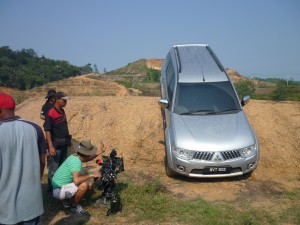 The production team ran into a problem with rapidly rising water levels in a river. The Mitsubishi ended up stranded for five hours while a group of rescue vehicles worked to retrieve it. Facing a riverbed like quicksand didn’t help, but one of the only other notable issues was finding a beach that wasn’t picture-perfect.

De Silva commented: “During the recce I found a lot of the beach locations too idyllic, as we were looking for something harsher. With a few of the beaches we looked at, I imagined adding some umbrellas and Piña Coladas and it would look like a resort; absolute bliss. Of course that was the complete opposite of what this project required!”