German car company Opel has filmed hot, cold and underwater on location in Spain for a new commercial for its electric Ampera vehicle. Going Further compares the car’s cutting-edge technology with the pioneering achievements of an ultra-marathoner, an alpinist and an apnea diver.

Tempomedia looked around the world for a country where they could find a snowy mountain, a desert and ocean within just a few hours’ of each other. Portugal was briefly considered but it didn’t offer any snow options. It was Spain that came up with the goods.

Initially we relied on Mamma Team's locations database to identify the most likely suitable places to film, and then we did short recces. The biggest challenges were the overall logistics of moving crew and gear up mountains and to the other locations.

Alexander Schildt executive produced the spot for Tempomedia: “It was ideal having a production base in Barcelona. We’ve been working with Mamma Team for five or six years. Initially we relied on their locations database to identify the most likely suitable places to film, and then we did short recces. The biggest challenges were the overall logistics of moving crew and gear up mountains and to the other locations.”

During the five-day shoot, Mamma Team brought in specialist firm Bluescreen, based in Valencia, which helped arrange the underwater filming following apnea diver William Trubridge. For this leg of the shoot the production filmed off Aiguablava Beach, up the coast from Barcelona. 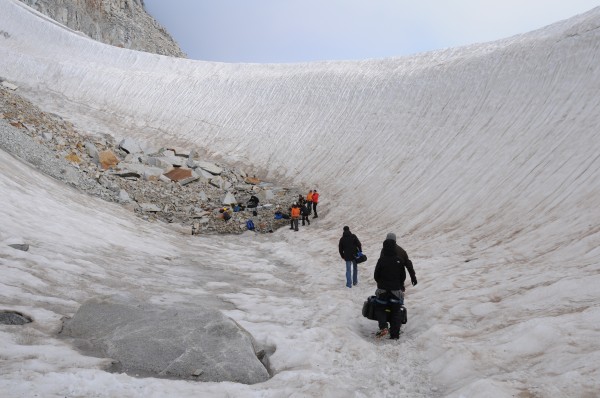 Toni Schulz executive produced for Mamma Team: “Bluescreen chose the best location to do the underwater filming. The visibility needed to be down to about 20 metres and filmed using specialist underwater camera housings.”

Filming with ultra-marathoner Scott Jurek took place in the Monegros Desert and the crew travelled to the Aneto Glacier on the French-Spanish border in the Pyrenees Mountains to follow alpinist Steve House. The crew and equipment were shuttled around by helicopter much of the time.

Schulz added: “We had 13 people filming on the mountain, as well as two mountain guides, but they had no filming experience. You can find snow all-year-round in Spain, which is where Spain has a major advantage over other countries.”