Vitamin supplement brand Berocca has made a spaghetti western homage for its latest spot. Donkey shows a man walking his donkey-drawn cart up a hillside wilderness. Re-energised by a Berocca Boost tablet, he modifies the cart and speeds back down the hill with the donkey as a passenger. 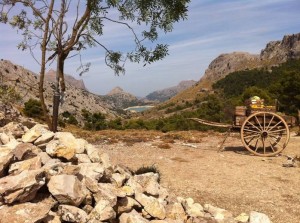 The spot’s set in Mexico but the size of the budget meant that was never a real production option. Parts of southern Spain were considered before the team settled on Mallorca. The island’s arid landscape was a major appeal as it suited the spot’s spaghetti western feel.

Sara Cummins runs Coy! Communications: “Getting the very large unit to such a high location [was a major challenge]. The ‘roads’ were just mountain paths and extremely rough. We had tracking vehicles, quad bikes and a Steadicam. And a lot of manpower! Take travel sick tablets for all the bumpy roads you have to travel on for over an hour!”

A day was spent on the island’s peak of L’Ofre and the bumpy roads en-route resulted in a people carrier put out of action when the vehicle’s oil tank was punctured. The rest of the spot was filmed in a studio with a trained donkey for shots in the finished advert that involved the animal riding as a passenger on the revamped cart.

Getting the very large unit to such a high location [was a major challenge]. The ‘roads’ were just mountain paths and extremely rough.

Cummins added: “The donkey was trained in Madrid to fall into a sitting position and it got used to having a fan blown at it too in order to simulate the wind blowing as the cart travels down the hill. We filmed it against a green screen at Palma Pictures’ studio. Palma was a brilliant team in every department. Nothing was too difficult for them.”