Lakebed artistry has come to Western Australia in a new commercial for the Hyundai i40 Tourer. Make an Impression follows artist Jim Denevan as he creates a stunning piece of artwork on a remote lakebed, using the Hyundai as his drawing tool. The spot was filmed over six days at Lake Rebecca.

Lake Rebecca's bed was hard enough to support the car’s weight, it was accessible and there were contrasting colours under the salty surface so artist Jim Denevan’s pattern would actually show up.

The production team scouted all over Australia looking for suitable salt lake beds to film on, but Lake Rebecca was eventually chosen, 150 km from the town of Kalgoorlie. The bed was hard enough to support the car’s weight, the location itself was accessible and there were contrasting colours under the salty surface so Denevan’s pattern would actually show up when he drove the Hyundai across it. 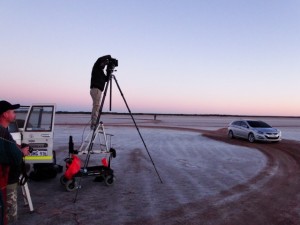 David Knight was the project’s Location Manager: “The biggest challenge was finding the right surface and consistency to work with. It always had the potential for disaster! We’d walked a lot of the lake’s surface and it seemed fairly hard but there were soft spots as well - I had recurring nightmares of the whole crew out there and cars stuck all over the lake!

“We could not drive on the lake until filming started because that would have caused marks that were not part of the design, so we employed a small quad bike that was light and did not leave large indents on the surface of the lake.”

Although Rebecca Lake was chosen partly because the logistics could be made to work, access was still a challenge. Knight found himself following compass bearings and small station tracks the first time he went out, and the production team ended up laying a temporary track through to where they’d be filming. 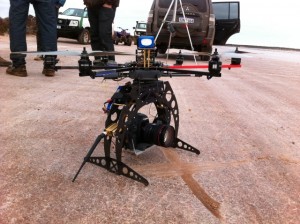 Local rainfall was one of the biggest concerns as this would have washed away the salt, leaving a rusty red colour and making Denevan’s artwork much harder to see. Unfortunately the production was hit by rainfall, but it was towards the end of the shoot and the aerial shots had already been captured so it had much less of an impact.

Knight describes how the team got creative when it came to capturing the aerial shots: “We used a remote-controlled helicopter (pictured right) that has six electric engines and a gimble mount slung underneath it that carries a Canon 5D camera. It could go as high as 300 feet and also track with the car at a fair speed. There’s a wireless link back to a monitor on the ground so the Director can see what’s being shot at all times.

We used a remote-controlled helicopter that has six electric engines and a gimble mount slung underneath it that carries a Canon 5D camera.

“We also used a Cessna 210 with overhead wings to film from. The DoP was in the front seat with his Focus Puller behind him. The Director was beside him so it was fairly tight in there and hot and bumpy to say the least!”