Indian vehicle manufacturer Tata Motors has had fun with movie spy conventions for its new ad. The Chase shows a couple out for a drive in the Tata Aria with their young son. Followed by sinister-looking black vans, the husband reveals he’s a secret agent and a manic chase begins.

The locations were chosen for the great contrast within an hour of Johannesburg central. We could find the grungy interiors of a power station and the sweeping vistas of the Cradle of Humankind - everything a filmmaker could ask for.

Filming took place during the height of the South African winter in mid-June in multiple locations around Johannesburg, with the production using the most diverse places that were within easy range of the city. There weren’t too many set dressing changes made as each location was chosen for its raw visual appeal.

Jon Gwyther directed the piece: “Tata Aria was filmed in Johannesburg in Heidelberg, Orlando Power Station, Pelindaba, Gerotek and Nash's Farm. The locations were chosen for the great contrast within an hour of Johannesburg central. We could find the grungy interiors of a power station and the sweeping vistas of the Cradle of Humankind - everything a filmmaker could ask for.” 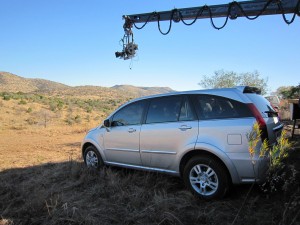 Filming went relatively smoothly, aside from extended negotiations to film in Pelindaba, which is where South Africa’s main nuclear research centre’s based. The production team wanted to film aerial shots for the final seconds of the spot where two vans plummet over a cliff.

Peter Carr was Executive Producer for Velocity Films: “This one took some negotiation with the owners who agreed on condition there was no helicopter filming and so we had to improvise the top shots with a techno crane to achieve the vans flying over the cliff edge. In the end this worked out better for us. Altogether, we found the local authorities to be most accommodating with all the stunts and road closures.”

Gwyther adds: “The finishing result look stunning, so I'm extremely pleased with the locations and especially with the beautiful South African light at that time of year.”