Written by Mags Lightbody on Nov 16, 2011. Posted in Contributors

Filming on location in Africa - be prepared to be unprepared

The prospect of filming in Africa generally sends Production Managers into paroxysms of dread and Co-ordinators into deep despair, but I love it and consider it the best place to film in the world.

With every shoot there will be obstacles to overcome, incomprehensible reasoning to navigate and the inevitable rescheduling, but we’ll always come back with fantastic rushes and a deep, heartfelt satisfaction.

Africa has everything to give a filmmaker; stunning locations, a deep history and obliging, vibrant people. Just being there is good for the soul.

The first thing you realise is that every country in Africa is very different. A short plane ride can take you from the sophisticated bars and beaches of Cape Town to the deserts and dunes of Namibia, from bustling Nairobi to the wildlife on the plains of the Serengeti and from Addis Ababa, clinging to Mount Entoto at 3,200m, to the tribal communities of the Lower Omo valley.

Key to a successful shoot is respect and understanding of the local cultures, good research and a reliable local fixer.

Even travelling 30 minutes by Land Rover in parts of Ethiopia can take you into a completely different tribal region, where 13-year-old boys are primed with kalashnikovs to protect their cattle from neighbouring raiders. Different parts of the same country can have different religious beliefs, customs, attitudes to Westerners and women. Key to a successful shoot is respect and understanding of the local cultures, good research and a reliable local fixer.

When planning a shoot, I always start with logistics and ideally a recce. There’s no point planning a three-day shoot if it takes several days to get to your location. Get a good map and spend time going through your plans with a good fixer. On a trip to Ethiopia, our fixer had to drive for ten days to get the back-up vehicles to our location which looked easy on the map, but it turned out there was only one crossable bridge across the mighty Omo river at that time of year.

On a long shoot - and with enough planning - solar panels can be installed quite cheaply and effectively to feed a few light bulbs and battery rechargers; the local community will appreciate it.

In remote locations, chartering planes is generally the best way to get about; a Cessna caravan is just about the only plane that will take crew and kit and can double up for aerials. Choppers are few and far between except in major capitals or more Western countries like South Africa and Kenya. Travelling by road can be dangerous and tarmacced roads are often the worst, frequently forming vital trunk roads between countries. There's the dangerous mix of heavily laden, exhaust-fuming articulated lorries navigating their way around donkeys and mules, or often not bothering. Off-road, four-by-fours can get mired and blow-outs are frequent - every vehicle should have a proper, trauma first-aid kit and everyone should know how to change a tyre. 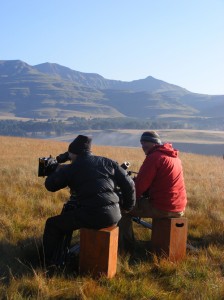 Accommodation needs to be thought about. Most cities will have comfortable - though surprisingly expensive - hotels with internet and ‘safe’ food for a tired crew, but when you’re in the field you might have to camp. A tented camp can be luxury, but there has to be room for kit to be stored and electricity available to recharge batteries, so expensive generators are often required. On a long shoot, and with enough planning, solar panels can be installed quite cheaply and effectively to feed a few light bulbs and battery rechargers, and the local community will appreciate it. In the Western Desert in Egypt a tent was thoughtfully put up for me (as the only female amongst 15 men) but as the winds picked up in the middle of the night it blew away and I ended up sleeping under the stars in an extremely comfortable bedroll amongst the crew and Bedu camp staff.

Bureaucracy can often hinder a crew’s progress, especially through customs, and especially in Tanzania. Confusion over what documentation is required, even amongst officials themselves, has seen me dashing between Western Union bureaus getting cash wired from the UK and stuffing a rucksack with thousands of dollars only to be told that all is in order after all by someone else a few hours later. Patience is a virtue in such circumstances and again the influence of a local fixer.

Although we’ve never had kit stolen, on numerous occasions kit hasn’t arrived with the crew at international airports, so always carry essential kit as hand luggage.

Some airports, like Addis Ababa, will insist on checking your kit through scanners several times before check-in. Others see paperwork as a pastime and will want to see lots of it so allow plenty of time between scheduled flights. Most African airports will have a horde of locals wanting to help you with your kit on arrival.

Djibouti Airport doesn’t have trolleys and the only way to move kit is by hand. Helpful locals will grab your equipment boxes at random and walk out of the airport with them, so diligence is imperative. A system of lining up numbered kit boxes and pelis as they arrive helps in co-ordinating their onward travel. Although we’ve never had kit stolen, on numerous occasions kit hasn’t arrived with the crew at international airports, so always carry essential kit as hand luggage. If using film carry it as hand luggage and do a camera test on arrival, as heavy-duty x-ray scanners are still in place in some major airports. 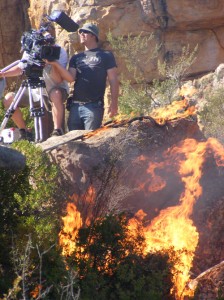 Weather patterns in Africa are a force to be reckoned with and change drastically throughout the year and from country to country, so plan your shoot accordingly. Rain can fall so that you can’t see three metres in front of you, roads can disappear into a sea of mud cutting off food supplies, and deserts can throw up a sandstorm that will disable your crew and kit in seconds. Always have an extra camera body, water and sand-proof bag and spare air cannisters, as well as fuel, food and water.

Health and safety in Africa is a major consideration when planning a shoot. It may sound dramatic, but extremes of temperature, remote locations and lack of communications can lead to life-or-death situations.

Lions and hippos really can walk right up to the door of your tent, whether your camera is there or not.

A recent, short shoot in Uganda led to a 14-page risk assessment covering everything from malaria to encountering forest elephants, trails of army ants and aggressive chimpanzees. Even the toughest of crew stomachs can be instantly disabled by an unfamiliar bacteria, so effective sanitation is imperative. Antibacterial gels and wipes are invaluable, as are instant, self-heating food packets; even if the menu gets repetitive, a crew member with food poisoning can be out of action for days. A safety briefing should be carried out at each location. Even with very experienced crew an effective and realistic exit strategy should be in place.

Africa’s wildlife is always a magnet to filmmakers but animals won’t perform on demand and have no inclination to stick to a schedule. If you want behaviour, expect to wait for it and budget time and schedule accordingly, though miracles do happen, and lions and hippos really can walk right up to the door of your tent whether your camera is there or not.

Unknowns will inevitably appear but invariably the unexpected adds to the overall experience and quality of your footage.

For the most part I’ve usually brought experienced crew over from the UK and have had mixed experiences with local crew. On a drama in South Africa we worked with extremely professional crew used to working on major movies and commercials, but equally in Egypt we had a hopeless camera assistant who was more of a hindrance than a help.

Filming in Africa requires a different mindset. You have to be well prepared but be prepared to be flexible. Unknowns will inevitably appear but invariably the unexpected adds to the overall experience and quality of your footage. Experienced crew and fixers are invaluable, as is good planning, an open mind and patience. And be prepared to be smitten.