Written by Murray Ashton on Nov 1, 2011. Posted in Interviews

Susanne has been working in the film industry as a freelancer for 20 years. She's been a Production Manager, Post-Production Co-Ordinator, Location Manager, Street Caster and, her favourite position of all, Location Scout. She's based in Stockholm.

Tell me about Stockholm.

I mostly cover the vibrant and historical city and its surrounding region. There are many special and unique locations here such as the medieval Old Town of Gamla Stan and the beautiful Stockholm archipelago with its 30,000 mostly uninhabited islands. There are also many large Swedish-style stately homes with well-maintained gardens, endless rolling fields and wonderful ancient forests. (Suzanne pictured below with former Sopranos actor Tony Sirico) 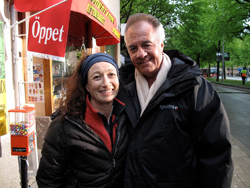 The region is about 27,152 sq km with a population of 2.9 million people; 30% of Swedes live here. Stockholm itself is a compact city with easy access to all metropolitan areas, surrounding coastline and the country’s interior.

Ljud & Bildmedia, Kameraten, Chimney Pot and Stop.pp are leading Stockholm rental houses that have just about everything you need for shooting film or stills, as well as a helpful attitude and good command of English.

Although most of my work is concentrated in Stockholm I'm able, and available, to cover all of Sweden.

What locations are most commonly used by film and TV crews in Stockholm?

In my experience the most asked-for locations are picturesque exteriors of the city which can change dramatically depending on the time of day; in Stockholm 'magic hour' really is magic!

What are the more unusual locations that you wouldn’t necessarily associate with Stockholm?

Skansen near the city centre, with its collection of traditional Swedish houses dating back to Viking times. Skansen is also the world’s oldest outdoor museum and is very popular. There's the Viking island of Birka with its reconstructed villages; Visby, Gotland, with its city limit walls, old town and marina; Fårö Island, with its ancient stone coastline and cliffs - it was a favourite spot of Swedish director Ingmar Bergman.

My hardest challenge was to match a southern location to a northern location that was going to stand up to a wide shot of a plane crash site for Wallander (pictured above) in the middle of winter… all within 30 minutes drive from the studio - not easy, I can assure you!

I mostly do commercials but sometimes film and still fashion shoots with production service. The most recent big film to have been shot in Stockholm was David Fincher´s The Girl with the Dragon Tattoo starring Daniel Craig.

Are there any particular tips that you would like to share with our audience about filming in Stockholm?

In Sweden we have a saying - “There is no such thing as bad weather, only bad clothes” - so be warned shooting during the Swedish winter is no joke! In summer you have 19 hours of daylight for shooting and in winter you have 16 hours a day for night shoots.

I would also suggest trying to employ as many key crew members from Sweden as possible. I say this because coming from California to the north of Sweden in winter can be a shock to the system.

All production companies have to have their own production insurance. Locations cost between SEK10,000 and SEK30,000 a day for a big private villa. To shoot in a city or town you will need a permit to block a street or to place a tripod in a public area. This can be easily obtained with sufficient prior notice.

There are many good clubs in SOFO (a region of the city) and restaurants on the island of Södermalm. I like to recharge my batteries by heading to the archipelago or out to the forest to pick lingon berries or yellow chanterelles! The waterways in Stockholm are also incredibly clean and great for swimming… they’ve actually built artificial beaches at some spots.