Written by Elle Matthews on Nov 23, 2011. Posted in Contributors

I knew the risk I was taking when I decided to change the name and nature of my thriving production company, Tidal Wave Productions, in 2009 and set up Green Shoot Films, an eco-friendly film company. 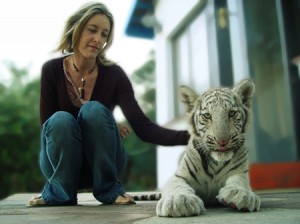 The industry was at a worldwide low and most producers in South Africa were taking any production jobs they could get at the time.

I had just written and produced my first feature, Oil on Water, which deals with undiagnosed schizophrenia, and I knew that going forward I would only be happy producing commercials, documentaries and feature films that had substance. And productions that were environmentally conscious.

For years I had become increasingly aware of the wastage involved in the film industry, and how much aspects of filmmaking like air travel, truck fuel and generators add to negative climate change, through CO2 emissions. At the heart of the new business plan for Green Shoot Films were some basic principles for ‘greening’ productions, including conserving fuel and energy, avoiding toxins and pollution, saving water and preventing landfill waste, to name but a few.

I now know that sustainable filming saves productions money – while also helping save the environment.

Once we’d decided that we didn’t just want to make films - we wanted our films to leave a lasting legacy on the planet - the plan was to start greening the production office and then roll out the eco-friendly process across our commercial and film shoots, through to post production. But implementing these principles was challenging.

There is no getting away from the fact that turning your production company into an environmentally-friendly business requires an initial investment of time and money. As I began the financial outlay to change our existing structure into a more eco-efficient one, I saw it as an investment in the future of our company… and the planet. And one, which - over time - works out to be more cost efficient. Two years after changing our productions to green shoots, I now know that sustainable filming saves productions money - while also helping save the environment.

The tricky part came on the film sets, where everything is fast-paced, and where 18K’s and extravagant scenery is the order of the day.

The most important change was bringing about a massive shift in mindset, so we started with our own production office. Email and electronic scheduling replaced printing, and we substituted driving and flying to meetings with Skype or phone calls wherever possible. Energy efficient lighting replaced conventional globes, and recycling became key to all we did, e.g. using recycled paper to print when we had to, recycling our ink cartridges, and donating used equipment to non-profit organisations whenever we replaced them. We also learned to switch off our computers and the lights. Whenever hiring vehicles in pre-production, we made sure they were fuel efficient and as ‘green’ as possible.

The tricky part came on the film sets, where everything is fast-paced, and where 18K’s and extravagant scenery is the order of the day…and the last thing anyone is thinking about is the environment! After announcing the company change to Green Shoot Films, we sent out indigenous saplings to clients and crew, with a statement about what the company stood for - that we were committed to sustainable film productions and adopted environmentally sound production practices. We then asked the recipient to plant the tree.

We also advised crewing agents that any crew we hired needed to be committed to our 'green' philosophy and efforts to make a difference through our film production practices. Our ‘green’ principles were set out in the crew terms & conditions whenever we contracted crew for a shoot.

We consulted with the gear hire companies to establish how they could work with us to ensure we had the most eco-friendly equipment during filming. We briefed our film catering companies to make sure we had organic, locally sourced products wherever possible, and to replace plastic bottled water with a tap water dispenser and recyclable paper cups, on our productions. Any fresh food left after a shoot was to go to a local church or charity.

One of the most effective ways to ensure green practices got carried out during major productions was through appointing a green steward.

Careful and creative planning when briefing Art Department helped reduce set-related waste dramatically over the course of productions, and over time they became more conscious of reusing and recycling throughout the construction, rigging and wrap processes. This included renting sets, props and plants instead of buying, choosing wood from trees grown in sustainable forests when building, and using less toxic paints, sprays, adhesives, cleaners and solvent-based products during set construction.

One of the most effective ways to ensure green practices got carried out during major productions was through appointing a green steward to help cast and crew implement sustainability practices by sourcing eco-friendly vendors and products, disseminating information and resources to crew and cast, and working with department heads to green their departments.

After a few productions, local crew began to get it, and at the start of every new shoot we would remind them to get back into the green mindset while working on our shoot. Eventually, small, simple changes began to make a big difference, like using eco-friendly cleaning products on set, banning smoking during shoots and choosing to film in environments that benefited crew, cast and clients. Wherever possible, we tied into the house power instead of using a generator, and powered down generators that were not in use. We even asked Hair & Makeup to avoid using aerosols. The unit crew particularly began to play a big role in ensuring we had green shoots, especially in terms of recycling.

We love working on projects about things that really matter, and with clients who have the welfare of people and the environment at the heart of their corporate culture.

The next challenge was to apply our green principles to the post-production process. The first and most obvious way of doing this was to use digital post-production workflow systems. Reviewing dailies and work in progress cuts digitally cut out fuel wastage, energy and couriers. We also chose media packaging made from renewable materials (like DVD covers), and distributed any promotional materials online. Working with post-production facilities, we were able to get their buy-in to support our green practices, and even extend these practices to their other clients.

One of the biggest changes to our business practice has been the kind of productions we’ve chosen to make. We are a unique film production company that offers a full local and international production service, in an enviromentally friendly way. But we also believe we need to fit with clients who make a difference through what they do and what they give back to the world.

That doesn’t mean we’re just about PSA’s. Any company that looks to protect the environment as part of its corporate social responsibility is our kind of client. We choose to work with clients with integrity… even if their products are polluting the world it’s what they’re doing about it that matters to us. In return, we offer them quality service, excellent production values and the most cost effective, eco-friendly ways to give them exactly what they need to achieve their vision.

The journey from traditional filmmaking to eco-friendly film production hasn’t always been clear-cut, or simple – and I don’t think it ever will be, until the film industry as a whole adopts more green practices. But at the end of the day we know what we’re striving for: to make films that highlight important issues, give a voice to those who would otherwise not be heard, and generally try and bring about change for the better.

We love working on projects about things that really matter, and with clients who have the welfare of people and the environment at the heart of their corporate culture. We care about the art in film, endangered wildlife and this planet we call home. It’s just our small contribution to making a difference and impacting the world in a positive way.