A new Russian film has staged a period bull run in northern Spain. Legend Number 17 will tell the life story of Valeri Kharlamov, who was born to a Spanish mother and became one of the world’s greatest hockey players before his tragic death in a car accident in 1981 at the age of 33.

One of the reasons we selected Pitillas was because they have a regular encierro once a year, so certain construction elements for installing the safety barriers were already in place in the street.

Pitillas suited the film’s needs both in visual and practical terms. A curve on the main street enabled the team to use fewer extras while still creating what looked like a large crowd on-screen. Then there was the town’s existing ‘encierro’ (bull-running) heritage, which was a help too.

Sergei Gurevich was Production Supervisor for Three T: “The main challenges were the very strict safety regulations, which are unavoidably connected with big costs. However, one of the reasons we selected Pitillas was because they have a regular encierro once a year, so certain construction elements for installing the safety barriers were already in place in the street and we didn't have to start from scratch.” 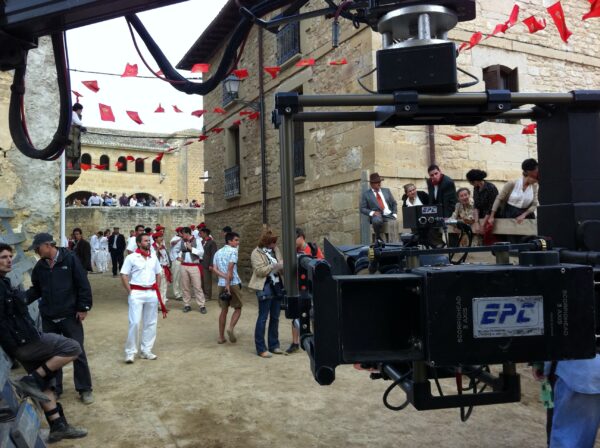 The team used 16mm Fuji film to capture the period setting, alongside a lightweight Aaton A-Minima and five GoPro cameras to capture the energy of the bull run.

Peter Welter Soler serviced the production through Fresco Film Services: “The set up was huge. The Russian technical team summoned about 40 people and on the Spanish side we were about 100, plus 100 expert bull ‘runners’ and around 250 background extras.”

Gurevich concludes: “The Navarra Film Commission has been quite helpful in obtaining necessary permits and the local Mayor's office was great - they've done everything to make the filming happen. I can also recommend Fresco Film Services.”

Current plans are to release Legend Number 17 in late 2012 in Russia.