Martin Scorsese’s new 3D feature Hugo is set within a Parisian railway terminal in the early 1930s. The station was built at Longcross Studios near London and needed a working train track, while London’s Victoria & Albert Museum stood in for the Parisian workplace of Hugo’s father. 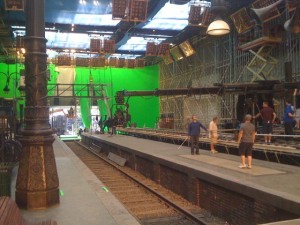 Hugo marks Scorsese’s first 3D project and the decision was made early on that the shoot would be mainly studio-based to make sure all the conditions were controlled and the 3D format optimised. The set needed a functioning railway line, both to add a sense of realism and because of a specific scene in the film where the young Hugo dreams of a moving train that acts as homage to one of the earliest films.

Jamie Lengyel was Supervising Location Manager: “To control the light, the rail track needed to be built within a vast warehouse location and having cleared access to deliver the trains, including cutting out two new roller doors into the warehouse, the rail track set was constructed over several months interior and exterior at Longcross Studios.”

Lengyel and train Art Director Stuart Rose researched heritage railways all over the UK, both for suitable trains to use in the film and for potential locations to shoot the exterior station entrance. In the end the Nene Valley Railway in Peterbrough provided French Pullman carriages and a German Kriegslock locomotive came from Bressingham in Norfolk. The exterior station entrance was eventually built at Longcross to link with the main station hall built at Shepperton Studios. The production filmed 3D footage of the wheels in motion at Nene Valley.

The train rolling stock was transported to the set tracks by low-loaders, with the 120-ton, 30-metre Kriegslock locomotive presenting a major engineering challenge. The train was rigged for steam and pulled into the station.

Lengyel adds: “The train rolling stock was transported to the set tracks by low-loaders, with the 120-ton, 30-metre Kriegslock locomotive presenting a major engineering challenge. The train was rigged for steam and pulled into the station. New exterior track points were created, with additional rail and over 25 truckloads of ballast so that overnight during filming the loco could be removed from the set and the train positions changed for shot and visual effects.” 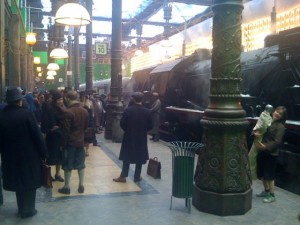 The Victoria & Albert Museum in central London was chosen for Paris-set flashback scenes involving Jude Law as Hugo’s father. Scorsese was struck by the museum’s Cast Courts gallery and the production secured permission to film there. The gallery’s glass roofs were covered to give the production total lighting control, sculptures were removed and 3D rigs had to be carefully manoeuvred between many of the exhibits.

Lengyel concludes: “Enthusiastically led by Rachel Lloyd, the V&A provides a professional, film-friendly service, with careful planning not only safely protecting the museum's spectacular collections, but allowing our not-insignificant presence (a crew of over 200 and all the equipment that comes with a major 3D production) to go largely unnoticed by the many thousands of daily visitors that pass through the museum.”

Hugo is in the midst of a staggered global release.