Cramped and expensive, real aircraft don’t lend themselves as convenient filming locations. Richard Chan runs Aero Mock-Ups, a bi-coastal US company that provides realistic and fully-functional aircraft interiors for use in features, TV shows and commercials. 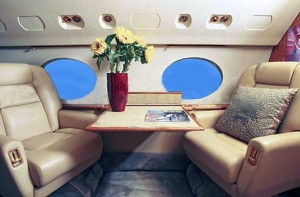 Aero Mock-Ups offers aeroplane interior sets for both short- and long-term rentals, and for aircraft including private and normal civilian jets. The so-called ‘Rolling’ set is usually used for rentals of up to three days and comprises ten-foot-long sections of half an interior cabin – in other words seats and windows with overhead baggage lockers, or a lavatory, galley or entryway on separate decks.

Distinct from this is the ‘Kit’ set, which is an 86-foot complete airline set that breaks down into its component parts and can be transported more easily in fewer trailers. This is usually rented out by the week, as art departments normally need time to dress the set according to the needs of the specific production.

So what’s the advantage of using Aero Mock-Ups in place of a real plane? Chan explains: “There are numerous logistical and scheduling huddles that a production company may go through to get clearance to shoot on a real aircraft. Once on the aircraft, moving equipment around requires airline mechanics to remove and install seats (forget trying to move a galley or lavatory unit) followed by an aircraft inspection, not to mention the horror stories of crews driving into wings or melting windows because lights were too close and grounding the aircraft.

A Technical Supervisor accompanies each set and with the aid of a couple of grip and carpenters they are able to set up the equipment usually in less than a day.

“Using one of our sets in a studio gives the production more control and offers a great deal more flexibility as we can wild-out (remove) walls and we can crash on cue, which an airline would not want to advertise.”

Chan’s company has offices in New York and Los Angeles. When they need to be shipped the parts are transferred by forklift onto 53-foot-long trailers ready to move, or by air freight. Chan has sent sets to Hawaii, Thailand, Germany and Japan. 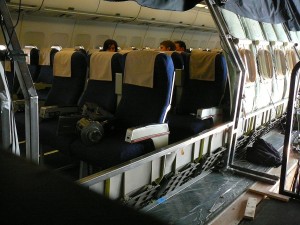 He adds: “A Technical Supervisor accompanies each set and with the aid of a couple of grip and carpenters they are able to set up the equipment usually in less than a day. From our facility in LA we have air-freighted a 30-foot-long narrow body set and 20-foot-long side of a fuselage to Addicted to Love in New York and had it camera-ready within 22 hours after been given the green light.”

There’s considerable demand for the service, with high-profile films like Contagion, The Avengers, Transformers: Dark of the Moon and the remake of The Girl with the Dragon Tattoo all using Chan’s sets in recent months. A lot of commercial work also comes his way, with ads for State Street Bank and Phillips all pending release.

Referring to the ‘Kit’ set, Chan concludes: “With the savings in transportation and a low daily cost to rent, this product has shown it can work with most production budgets and is ready to travel to any location.”