UK-based brand Ahmad Tea has filmed its new spot in Portugal as a double for Britain, after scouting throughout New York and London. Filming took place at the Palacio de Marquis de Fronteira in Benfica, Lisbon, a location which offered the aristocratic setting without the inflated costs.

The brief called for the mood of popular period dramas like Downton Abbey and Brideshead Revisited for a spot that’s set in the early 1900s. In addition supporting cast members with perfect English had to be cast locally. 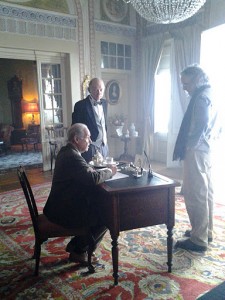 Marilyn Alexander was Executive Producer for Artists Group: “It was the first place that I thought of, as we had shot there before with Deborah Turbeville and it just fit the brief perfectly. Once the clients saw the photos nowhere else was considered.

"All priceless 'objets d'art' were removed at our request. We also removed most of the furniture to allow for the two cameras and dollies - then the art dept re-dressed the set.”

Andrei Iliasov was Creative Director: “Marilyn made it top quality in all aspects. And it was a real pleasure to work with [actor] John Standing and Michael [Buckley, the Director and Cinematographer]. Actually the entire team was fantastic. Art direction, set design and wardrobe were fantastic.”

Fronteira Palace dates back to 1640 and remains the home of the Marques de Fronteira, who gave permission to film in the building.

The spot will be released in the next few weeks.