Written by Murray Ashton on Dec 16, 2011. Posted in Interviews

Filming in Bolivia with the Benavides family

The Benavides are a unique ice-climbing, Harley-loving father-and-two-sons production team. Yecid Senior studied Mechanical Engineering at the University of Miami but has made a career as a musician and producer. Yecid Junior is also a musician as well a director, artist and actor. Johanan left school at 13 and has been completely dedicated to business and film production ever since. Still only 20, he's considered one of the best DoPs in Bolivia. 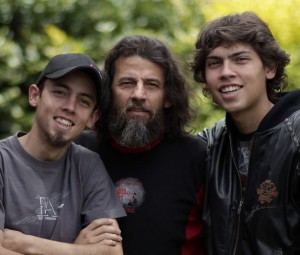 "As we are a three-in-one package, people like the fact that we can see a production from several different angles and understand it thoroughly."

Together they created and run Artistas Latinos, as well as the Siembra Foundation. The foundation promotes social responsibility, peace and unity through art.

"We have a broad network of great friends and professionals who are ready to collaborate and provide a seamless service for every production."

Tell me about Bolivia.

Bolivia is a landlocked country, which at first might make it seem like an odd place for filming. However, the ocean is about the only thing that Bolivia doesn’t have in terms of locations. It's located in the heart of South America, surrounded by Brazil, Paraguay, Argentina, Chile and Peru. The locations on offer include salt and desert flats (plateaux), valleys, jungle, rainforest, the Andes (glaciers and adventure) and colonial cities. We cover a very large region but we'll make it as easy as possible for anybody who wants to shoot here.

Our country is commonly seen as unreliable or unsafe but if you're with someone who knows the ropes you'll have a fantastic shoot. We have a lot of our own equipment (jibs, dollies, Steadicam, cameras, lenses and lighting) that come with our trained, English-speaking operators if you need it.

Basic post-production can be done in Bolivia - from editing up to a DCP - with good results.

In terms of cast we can provide a wide variety of people who will work for moderate wages and provide a professional environment. Caucasians are obviously a bit hard to come by in terms of actors, but it’s not impossible. We’ve done it before!

There is only one small studio available at the moment but hopefully it will only be a matter of time before more are developed as our industry takes off. Basic post-production can be done in Bolivia - from editing up to a DCP - with good results. However, if someone is expecting an international level of facilities throughout the whole process in that area, they won’t find it here.

La Paz city is close to a number of different locations. A couple of hours driving will take you to anything from glaciers to jungle.

What locations are most commonly used by film and TV crews when they film in Bolivia?

Tiwanaku (the pre-Inca and Inca ruins), Death Road (rated by some as the most dangerous in the world), the Uyuni salt flats, colonial streets and houses in La Paz, Sucre and Potosi.

Another favourite is our famous Lake Titikaka and its islands. It's the highest navigable lake in the world, with hugely picturesque, handmade straw sailboats and their indigenous skippers.

What are the rare, more unusual locations that our readers would not necessarily associate with Bolivia?

Bolivia automatically brings to mind images of llamas, mountains, adobe huts and indigenous people. Obviously one can spend a lifetime getting stunning images of all these, as well as jungle shots in the eastern and northern parts of Bolivia.

People, though - even locals - don’t normally associate Bolivia with high luxury or urban locations. However, certain areas lend themselves to quite international looks that have been the backdrops for modern situations - even chases and action sequences. There’s also no shortage of mansions and beautiful houses.

We even had to secure people (cameramen and other crew) a few feet off the edge of the 1,800 ft cliffs with our climbing equipment, but we got the shots.

Other beautiful locations are Curahuara de Carangas and Ciudad de piedra - sandstone paradises with lush eden-like valleys! If you don’t believe us treat yourself to a small location scout down here. Also rural Potosi offers beautiful and varied landscapes with many different types of valleys, plains and marshes that wouldn't be out of place in a production like Lord of the Rings.

Salt flats at 4,200 metres above sea level are always a harsh environment to work in, but we’ll have to say the Death Road because it is difficult to arrange transportation and traffic in such a dangerous place with most parts of the road being only single-lane. We even had to secure people (cameramen and other crew) a few feet off the edge of the 1,800 ft cliffs with our climbing equipment, but we got the shots - and they were definitely worth it!

TV and documentaries are happening all the time but international features and commercials are less common. However, we've had all four of these types of productions happen in the last six months. We shot the Mitsubishi commercial for the Outlander SUV at the Death Road (above) a few months ago. It was produced by John Quinn from Boxer Films in Los Angeles, directed by Jordan Valenti and fixed by Maxim and Simon Holland from Tambo Film. Artistas Latinos was the local production company and Johanan directed and photographed the documentary that accompanies the commercial.

The Spierig Brothers, Michael and Peter, (Daybreakers, Undead) and their Academy Award-winning DoP Ben Nott from Australia shot some scenes with us for their new feature. We took advantage of the huge and gorgeous Gran Poder parade. They're back next year to finish principal photography.

An American short and a feature-length film from an Italian production company also shot with us at the Uyuni Salt Flats.

The History Channel came to us through our partners at Tambo Film and shot Ice Road Truckers: Deadliest Roads on the Death Road at the same time as the Mitsubishi shoot.

National Geographic shot Taboo Latin America with us and a few years back we shot Bone Detectives with the Discovery Channel, GRB Productions and Matthew Reccow.

Punctuality can be an issue with people outside the film industry, so take necessary precautions.

Actors Gael Garcia Bernal and Luis Tosar came with the Spanish production Y Tambien La Lluvia (Even the Rain) directed by Iciar Bollain. The film was shot entirely in Cochabamba and the Chapare rainforest. They had to recreate the colonial period for that one, including building some ships!

Blackthorn, the story of Butch Cassidy (played by Sam Shepard), directed by Mateo Gil (writer of Vanilla Sky and Sea Inside) was shot in the Altiplano region and the Uyuni Salt Flats.

Because of the altitude in the western cities of Bolivia, it's can be best to come a few days before any strenuous work to allow your body to acclimatise. Your body needs at least 48 hours to generate all the extra red blood cells it needs. Don’t act too tough (loading and unloading stuff) for the first day or two. Avoid eating uncooked vegetables or drinking tap water and you should be fine.

Punctuality can be an issue with people outside the film industry, so take necessary precautions.

Check with your fixer down here before writing off Bolivia as your stereotypical Third-World country. You won't need to bring as much equipment as you think.

In terms of production anything is within reach. There is so little red tape here if you know how to ask and who to work with you will achieve things that would be out of the question elsewhere.

Helicopters are more easily available in the eastern cities (no Tyler Mounts or Cineflex yet, but there are a couple of hard camera mounts) and if you know what you’re doing you can get some that fly at high altitudes. Expect a lot of bargaining and some unreliability in terms of helicopters showing up. We’ve had mostly great experiences but every now and then a deal will fall through late in the negotiations.

Be nice and warm to people and you will get much better results. Make sure you don’t leave Bolivia without trying Salteñas, a special local empanada-style meat pie that people dream about when they leave!

We are personal friends with the owners of several hotels so most things can be fixed with just one phone call.

Which are the best airports to use to film in Bolivia and who flies there?

Freight agents are a bit hit and miss. It’s better to contact the production counterpart down here and have them figure out which one is best for the particular task and at that particular time.

What are the most film-crew-friendly hotels in Bolivia and where is your favourite wrap party venue?

Hotel Los Tajibos, Hotel Camino Real, Hotel Europa and Hotel Presidente are the best. We are personal friends with the owners of all these so most things can be fixed with just one phone call.

A wrap party in La Paz should be at either Gitana or Mojos Lounge. Santa Cruz is a wrap party city! And if in Tarija (southernmost state) you could have a wrap party week!

There are usually set costs for Public Liability cover for film units and costs for insuring locations. Can you tell us about location insurance and possibly examples of costs in Bolivia?

Location owners (even the Government) are not too sure what 'public liability' means. You can get it from some insurance companies here and we have good relationships with some of the owners, but it is highly unlikely you will find a location where it is a requirement. We recommend you get it and can help you get good prices if we happen to need that type of insurance. As far as film equipment insurance and film stock insurance, no company offers that here.

What do you do with your time off and what would you recommend crew and cast do to have fun and relax in Bolivia?

Climbing a peak above 6,000 metres for the adventure seekers would be at the top of our list. Also biking down the Death Road and finishing it off with a very long zip line is another option.

For those who like to wine and dine you can find very good Bolivian or Argentine beef in different restaurants and don’t miss out on Aranjuez Terruño, a fantastic and cheap (USD 2.5) red wine that you’ll probably be taking home as a souvenir.

Also, in La Paz, a relatively short drive will take you to the Tiwanaku ruins, which can be followed on the same day with a short trip to Lake Titikaka and a delicious trout dish.

If you want to stick around the city, a walk around Sagarnaga Street and Calle de las Brujas (Witches Street) in order to get souvenirs can be followed by a visit to a few museums. Cap it off with a night of native Bolivian music and a revue with an assortment of Bolivian dances and costumes at different Peñas. It will be an unforgettable day.

Each city has its things and we can help you decide, but for those who like more intimate or artsy fun we can just pull out the guitars, a few drinks, some cheese, wine and we’ll sing you a few of our own songs and a ton of other music that could easily last till the sun comes up!