Written by Murray Ashton on Dec 28, 2011. Posted in Interviews

Craig is the Senior Location Specialist with the Georgia Film, Music and Digital Entertainment Office, and is tasked with promoting the state as a shooting location for all types of productions. 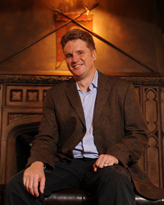 "I was raised in Georgia so I know the state well. While I have plenty of experience in film and television production, I came across location scouting in an unusual way."

Craig runs a website/podcast on Southern US folk culture and storytelling called The Moonlit Road:

"During my research travels in Georgia I would frequently run across rustic gas stations, beautiful farms, creepy swamps and so forth, and wondered how such locations could be promoted as filming locations. I learned there was someone at the state film office tasked with finding such places, and before I knew it I was doing that job."

Craig is also the manager of Georgia’s Camera Ready programme, which is a unique network of county liaisons that provide local assistance, information and location photographs to interested producers.

Tell me about Georgia.

The Georgia Film, Music and Digital Entertainment Office (GFMDE) is located in Atlanta and covers the entire state. We also have a network of county liaisons throughout the state via our Camera Ready programme that can assist producers on the local level.

Georgia has a wide variety of locations and can stand in for pretty much anywhere in the world. Our topography encompasses everything from the Appalachian Mountains to coastal beaches, islands and marshes, major urban cities to small town squares and rural farmland. Georgia is the largest state east of the Mississippi River in terms of land mass, encompassing over 59,000 square miles.

Georgia has state-of-the-art production studios, a deep pool of supply chain companies and scores of local vendors such as camera companies, casting agents, caterers, equipment rental houses, props and wardrobe suppliers, post-production companies and music scoring facilities. Our crew base is very deep and experienced, and growing fast. Film resources and crew can easily be found in the Georgia Film & Video Sourcebook.

What locations are most commonly used by film and TV crews when they film in Georgia?

Certainly urban locations are popular, along with historic town squares, beaches, mountainous landscapes and antebellum-style homes. But location scouts also frequently look for closed prisons, hospitals and schools that would normally be hard to shut down if active.

What are the more unusual locations our readers would not necessarily associate with Georgia?

We have barrier islands, marshland and swamp on our coast that could pass for jungles elsewhere in the world. Atlanta’s modern downtown has been used as New York City, Washington, DC, and even Rio de Janiero! Some of our colleges look like New England campuses. Our flat and open agricultural landscapes in South Georgia look like the Midwestern or Western US. Just this year we had two military bases close in the Atlanta area.

Believe it or not, two of my most challenging scouts were zombie movies. One movie was doubling Georgia as Iowa and needed wide-open plains without a tree in sight - a challenge in Georgia.  The other movie took place in the bowels of an airport baggage handling area. They didn't want to use a functioning airport so we found a closed towel factory with functioning equipment that looked almost exactly like a baggage handling centre.

These days I work primarily on feature films and TV movies/series/pilots, although I assist all sorts of media projects when needed.

TV series that shoot in Georgia include The Walking Dead, Teen Wolf, The Vampire Diaries, Drop Dead Diva and even the game show Family Feud!

Georgia has a generally mild climate and you can shoot here year-round. Even though we are in the South we still have four distinct seasons, so you can also get varied seasonal looks.

We have numerous film-friendly hotels; everything from chains to luxury properties and corporate housing. We provide a list of our hotel contacts to producers upon request. Atlanta has a large number of upscale nightclubs and restaurants that have been used for wrap parties.

Our office is typically not involved with negotiating location costs and insurance, although a local Location Manager says that productions typically carry insurance policies of USD2-5 million per occurrence, with an aggregate of USD10-15 million.

Georgia has numerous opportunities for outdoor recreation, including many beautiful state and national parks. Many locals escape to the beaches or mountains when they want to get away. History buffs can explore our numerous Civil War and Civil Rights heritage sites – Georgia was at the centre of both historic events. We have a vibrant music and arts scene throughout the state. Large cities like Atlanta, Savannah and Athens have abundant nightlife and internationally-renowned restaurants.